NEW DELHI – Pakistan women beat India by two runs in their Group B fixture of the ICC Women’s World Twenty20 2016 at the Feroz Shah Kotla in New Delhi on Saturday, reported ICC.

The rain stopped play at the end of the 16th over in the second innings with Pakistan on 77 for 6 – two runs ahead of the Duckworth-Lewis par score of 75.

The heavy shower stopped after a few minutes, but it continued to drizzle for a longer duration. By the time the covers were off, the clock had ticked past 6.50pm – the official cut off time. The narrow loss was heartbreaking for India, who now finds itself in a tricky position, with England Women and West Indies Women, two tournament favourites, its next opponents.

Pakistan needed 20 off 27 balls with six wickets in hand, when Sushma Verma, the wicketkeeper who had missed a runout and a stumping chance in the previous two overs, collected the ball from the point field to send Asmavia Iqbal back. She produced a direct hit off the next ball at the bowling end to dismiss Sana Mir. Before that Mithali Raj had taken a stunning diving catch at cover to trigger Pakistan’s mini-collapse.

The stage was set for a thriller, but rain intervened to give Pakistan its second-ever win against India across formats since the arch-rivals played their first match in 2005.

It was only fair that Pakistan prevailed for it was the better team on the day. Mir, who decided to field first so that her batters knew the target, started with a defensive field and had no slip. She packed the cover region, asked her spinners to bowl outside the off stump and forced the Indians to play cross-batted shots.

VR Vanitha played two consecutive cover drives off Anam Amin straight to the fielder and then heaved a similar ball to be caught smartly by Mir at midwicket. Smriti Mandhana was lbw playing across the line to Asmavia Iqbal, as India managed only six scoring shots to be 7 for 2 in the Power Play overs.

Raj hit a full toss from Nida Rashid on the off stump straight into the hands of the deep midwicket fielder. Not long after that, Harmanpreet Kaur, in an attempt to accelerate the scoring, was caught at long-off off Sadia Yousuf’s first delivery after changing ends.

Veda Krishnamurthy, who dislocated her finger while fielding, was the only batter who looked up for the challenge, and the lofted flick shot for one of her three fours made for attractive viewing. Krishnamurthy looked set to take India past the 100-run mark, but Mir, seeing her stepping down the track, pulled the length back for a caught and bowled dismissal.

The onus was on Jhulan Goswami after that to hit some big shots, but she failed to connect the ball as Pakistan suffocated India.

India’s defense got off to a poor start, as Nahida Khan hit three fours in the first two overs. After that, Pakistan just had to bat sensibly. With the target always in sight, Sidra Ameen played a few shots and took some sharp singles during her 29-run partnership for the second wicket with Bismah Maroof. 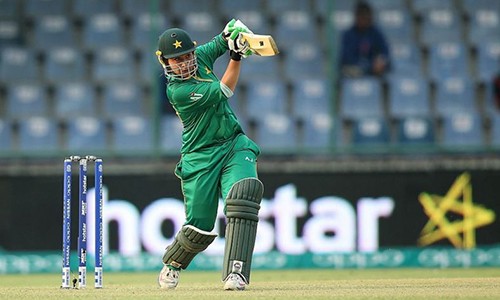 Raj kept asking her bowlers to bowl on the offstump, and attacked. It resulted in Rajeshwari Gayakwad uprooting Ameen’s stumps with an arm ball. Maroof was caught in the next over before Raj’s catch, but the odd boundary along with the continuous flow of singles kept Pakistan ahead at all times. The other differentiator was Pakistan’s running between the wickets, getting their angles right and running several doubles.

Pressure was clearly on India as Verma failed to collect the ball to run out Muneeba Ali in the 15th over, and in the next over she gave Ali another life, missing a stumping off Poonam Yadav. It proved decisive in the final analysis as Pakistan had just enough breathing space to stay ahead of the required Duckworth-Lewis target. 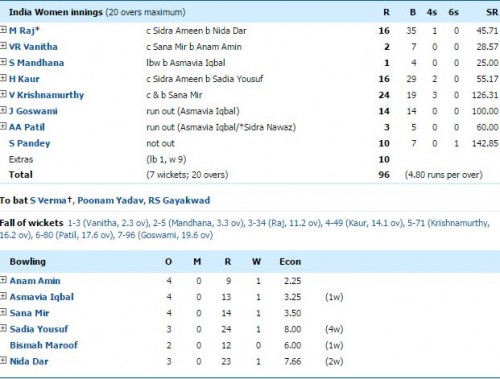 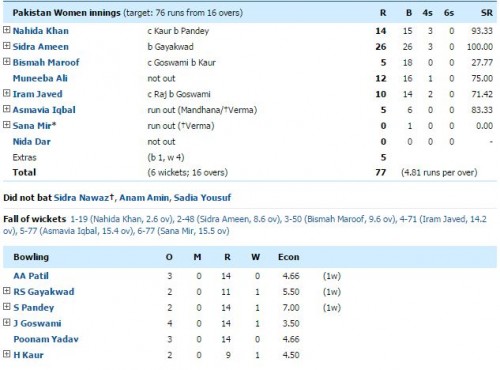