DUBAI (92 News) – Sidra Ameen’s half-century and three-wicket hauls from Diana Baig and Nashra Sandhu helped Pakistan women secure a four-wicket win in the final one-day international of the ICC Women’s Championship series against the Windies in Dubai on Monday.

Pakistan once again proved that their batting performance in the first ODI – they were bowled out for 70 – was an aberration as they chased down the Windies target of 160 in 47.2 overs.

Victory meant they rose to No 4 in the IWC table, pushing the Windies and England down a place to No.5 and 6 respectively.

When the Windies opted to bat, this wasn’t how they envisaged the day progressing. Kycia Knight was bowled for nought by Baig, the medium pacer, in the very first over of the day. Deandra Dottin and Stafanie Taylor, their captain, then steadied things, putting on a 34-run stand.

It was a promising partnership, but it ended in unfortunate circumstances as Dottin was run out for a 20-ball 28. However, Taylor continued to have fine support in Shemaine Campbelle, and the two steadily kept things ticking along, putting on an important 52 in 12 overs.

But everything changed when Campbelle was stumped off Sandhu for a 43-ball 26. Chedean Nation (3), Natasha McLean (2) and Chinelle Henry (6) were all sent back in quick succession before Baig had the big one when she prompted Taylor to chip one back for a 95-ball 52. 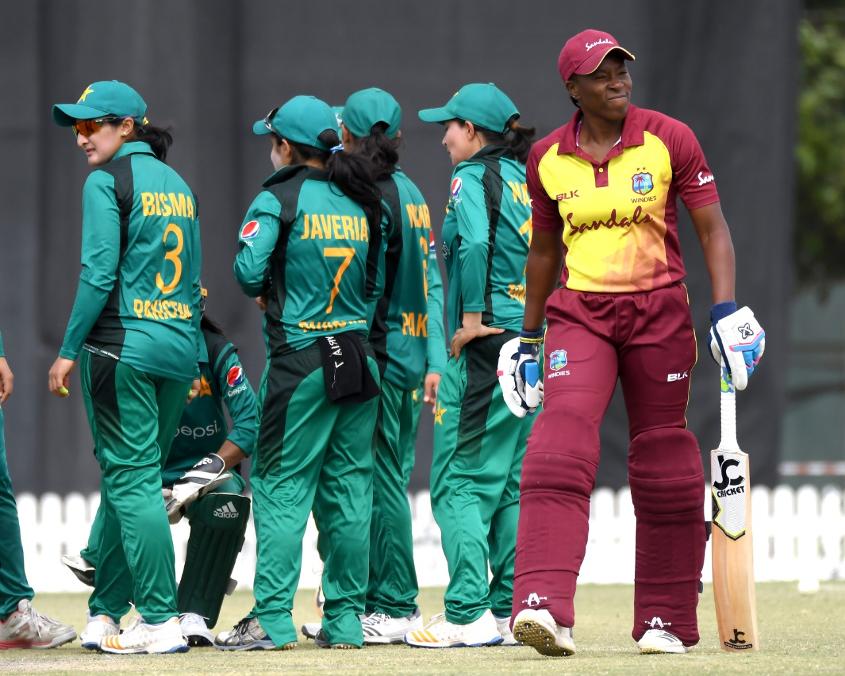 From 87/2, the Windies had collapsed to 131/7. Afy Fletcher mustered everything she had to boost the total, scoring a 39-ball 21*, but with little support from the tail, the Windies were bundled out for 159 in 47.3 overs.

Given how Pakistan had fared while chasing in that first ODI, there might still have been some pressure on them. But their top order allayed concerns early on, and despite the Windies best efforts late in the game to pile the pressure, the hosts did enough for victory.

Ameen and Nahida Khan added a composed 32 for the opening wicket. And even after Nahida’s fall – Shakera Selman sent her back for a 22-ball 15 – Javeria Khan sealed up one end to support Ameen.

The two added another 44 for the second wicket, and though the Windies managed two quick wickets, scalping both Javeria (24 off 49) and Bismah Maroof (5), Ameen once again found support from Nida Dar (26 off 51).

Their 46-run stand for the fourth wicket took Pakistan to within 32 runs of victory, with Ameen bringing up her third ODI half-century en route. However, both players were then dismissed in quick succession, giving rise to concern that Pakistan might once again fumble the chase, despite having come so far.

But it was all too little too late for the Windies. Kainat Imtiaz and Sana Mir added 24* runs for the seventh wicket and Pakistan ended with 163/6 on the board.