NEW DELHI – If the first match on Holi Thursday, between Australia Women and Sri Lanka Women, featured Australia complete a big win, the second game too had a clear winner as Pakistan Women registered a nine-wicket victory over Bangladesh.

Pakistan and Bangladesh were both extremely expressive on the field and kept energy levels high all through. The tone was set by Asmavia Iqbal, who shaped the ball in to the right-hand bats with consistency. There was plenty of oohing and aahing when the ball beat bat and when Salma Khatun looked to play to the on side and was bowled by a beauty of an inducker. That was 22 for 2, and Bangladesh was in some danger of allowing Pakistan’s bowlers to get on top of it.

If Asmavia was all skill and verve, the introduction of Bismah Maroof brought a delightful calm to proceedings. Reading the pitch well, having spread her in-out field appropriately, Maroof took all pace off the ball. The floated, loopy offerings landed with excellent accuracy, forcing the Bangladesh bats to do all the hard work.

The one most up to the task was Fargana Hoque, who realised early that the best option was strike rotation. Along with Sharmin Akhter, Fargana nursed the innings back to health, adding 43 for the third wicket.

When the time came to press on, however, Bangladesh lacked the firepower, and Pakistan was disciplined enough to keep chipping away. Fargana, who made 36 from 37 balls, with only two boundaries, posted the highest score of the innings, although several others got starts.

Sidra Nawaz, the Pakistan wicketkeeper, lived up to the stereotype of livewire stumpers, pouncing on the ball to effect a run-out before pouching a wide yorker from Asmavia to effect a smart stumping.
Bangladesh managed 113 for 9 in 20 overs, and this didn’t trouble Pakistan, who was chasing in its third successive game.

Nahida Khan began like she meant business, pinging two boundaries in quick succession before playing around a straight ball from Salma to be trapped in front.

At 15 for 1, Pakistan had not got off to the start it might have envisaged, but little did Bangladesh know then that the best was behind them. Sidra Ameen and Maroof, who had already contributed plenty in the first half, came together with just short of a hundred runs needed and they would not be separated till the job was done.

Ameen was more than happy to wait for the loose ball and when it came she cashed in. Whether it was cutting a short ball from Lata Mondal briskly through point, or efficiently putting away a full-toss from the same bowler to fine-leg, Ameen was on the ball. But, when the loose balls did not come her way, she did not attempt anything outlandish, focussing on picking off the low-risk ones and twos.

Maroof was confident enough to walk down the track to Fahima Khatun and lift the ball over the bowler’s head for a boundary early on, but the crowd really got going in the 14th over, when Rumana Ahmed was taken for a hat-trick of fours. The first, a powerful strike down the ground, was followed by a bottom-handed leg-side crack and the icing on the cake was a wristy whip to the midwicket fence.

Ameen reached her maiden Twenty20 International half-century, off only 43 balls. Maroof richly deserved to get to the landmark herself, but had to be content with an unbeaten 43 as Pakistan ran out of runs to chase. A nine-wicket win was sealed with 21 balls to spare as Pakistan gave its chances of progressing to the next round a welcome boost. 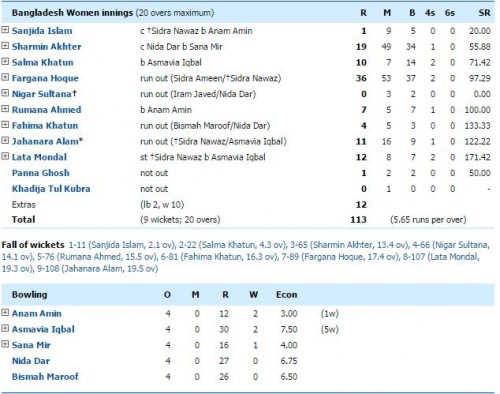 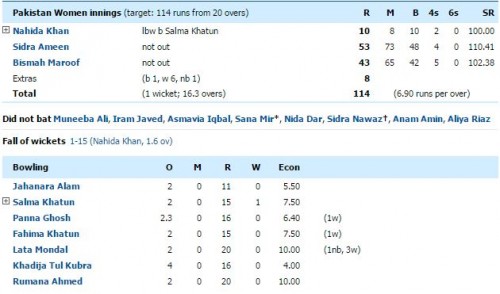