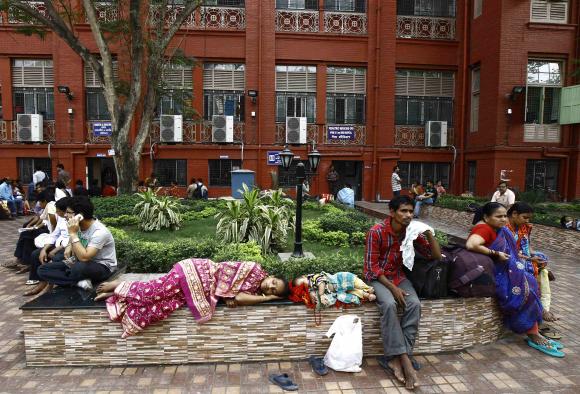 NEW DELHI (Reuters) - India's main public health programmes, aimed at millions of rural poor, have been in disarray for months because the government changed the way that over $1.3 billion in federal funds were distributed, according to data and letters seen by Reuters. In a bid last year to give India's states more power, the federal health ministry started sending funds for public health programmes to state treasuries, instead of direct transfers to its regional arms. But poorly-run regional bureaucracies were unable to cope and both the flagship National Health Mission (NHM) and India's AIDS prevention programmes suffered - thousands of health workers were not paid for months and the construction of clinics in rural areas was delayed. In some cases, state governments temporarily used the funds earmarked for health programmes to meet needs of other sectors, health officials said. The funds involved amounted to about one-third of the total federal spending on health, and led to further deterioration in India's tattered public health system. Eleven letters obtained by a Reuters reporter under India's Right to Information Act revealed the health ministry's desperate, and failed, attempts to push states to release funds to NHM arms. "The progress in NHM works has slowed down considerably in most of the states," federal Health Minister J.P. Nadda wrote in a letter to the finance minister in November. "I urge you to review the decision and allow the ministry to transfer funds directly to state health societies." The decision last year to route many payments through states, launched by the previous Congress party-led government, affected other sectors as well, but the impact on health programmes has been glaring. India spends just 1 percent of its GDP on public health, less than Afghanistan and Sierra Leone. On Saturday, the federal government increased the annual budget for its main health department by just 2 percent to $4.8 billion. Still, India struggles to spend all of its allocated health funds because of an inadequate number of doctors and hospitals, and bureaucratic bungling. Data shows the government has only once spent all of its health budget since 2005. Since April, the federal government has sent more than $1.3 billion to the states for the NHM, which undertakes treatment of diseases such as tuberculosis and malaria, construction of rural health centers and immunization drives. No state treasury released the funds to the designated health societies within a stipulated 15-day period, with delays running into months in some cases, according to government data seen by Reuters. More than $180 million is still to be released. AIDS PROGRAMME India's AIDS prevention drive, a programme separate from the NHM, was also affected by the new payments system. Workers from high-risk groups, such as sex workers and injectable drug users, who are employed to run programmes within their communities are quitting because of irregular pay. Rama, a project manager in one such community-based programme for sex workers in Mumbai, said 17 of her 23 team members have quit because of delayed salaries. New people hired will take months before they can efficiently run the programme. "It takes a lot of time to build trust within our communities. Our HIV testing numbers have fallen by half because sex workers don't trust new people," said the 26-year-old, who says she moonlights as a sex worker herself to survive. India runs more than 1,800 community-based programmes for AIDS prevention. The World Bank has estimated India's policy of targeting sex workers to control AIDS would avert three million infections during 1995-2015. Government data showed that India's National AIDS Control Organisation released $67 million to state governments in recent months as a second installment for the overall programme, but only $39 million reached its state-level health societies. The first installment of $78 million was released by state treasuries after months of delays. "What can we do if states are not caring about its people?" said a government official in the federal capital, New Delhi. "Now we are at risk of the numbers (of AIDS patients) increasing again."