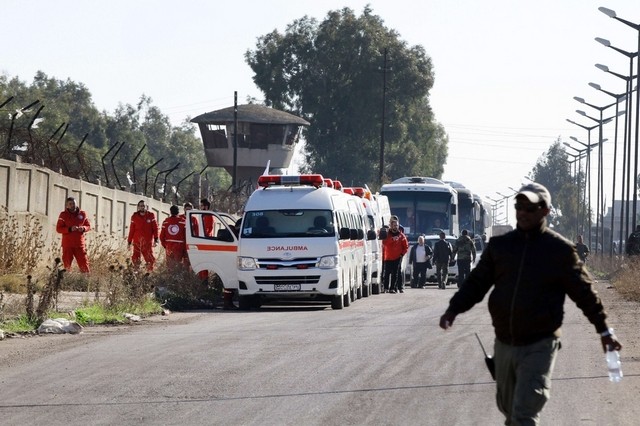 BEIRUT - Scores of people left the last area held by insurgents in the Syrian city of Homs on Wednesday under a local truce between the government and rebels, a monitoring group said, a rare agreement in Syria's nearly five-year conflict.

Three buses carrying people had left the previously besieged district of Waer, the Syrian Observatory for Human Rights said. About 750 people were expected to leave during the day for rebel-held areas in the Hama and Idlib provinces.

Priority will be given to women, children and the severely wounded, the Observatory's head, Rami Abdulrahman said, citing sources on the ground. But the evacuation will also include scores of fighters and their weapons who reject the truce, he said, among them a small group from al Qaeda's Syria wing Nusra Front.

Homs was a centre of the uprising against Syrian President Bashar al-Assad that began in 2011. After a two-year government siege, a previous truce allowed insurgents to withdraw from the Old City. Waer and other areas remained in the hands of insurgents..

Some observers had criticised that previous agreement as an enforced surrender. The Observatory said the Waer deal was better for the rebels this time because some fighters will stay in the district and the deal will be implemented in stages.

The United Nations is presiding over implementation of the deal, which was agreed directly between the Syrian sides. Some diplomats say local ceasefires between Syrians may be the most effective way of gradually bringing peace to a country where more than 250,000 people have been killed.

Syria peace talks involving world powers in Vienna in October called for a nationwide ceasefire and a renewal of U.N-brokered talks between the rival Syrian sides. Saudi Arabia is convening an opposition conference this week as part of that process.

Homs Governor Talal al-Barazi told Reuters this week he felt "positive, good and promising steps" were being made towards implementing the accord, which started with a ceasefire.

Humanitarian aid reached the Waer district last week under the terms of the agreement.

The Syrian army and allied militia launched a major ground offensive north of Homs city after Russia, the main ally of Assad, began carrying out air strikes in support of the Syrian military more than two months ago.

U.S. President Barack Obama said last month that there may start to be pockets of ceasefires in parts of Syria, freeing opposition groups from Russian bombings.

The Homs deal follows the stalling of a separate plan aimed at halting fighting between rebels and government forces near Damascus.

In late September, Iran and Turkey, which back opposing sides in the Syrian conflict, also helped bring about local ceasefires in the town of Zabadani near the Lebanese border and in two villages in the northwestern province of Idlib.

A diplomat tracking Syria said the Waer agreement was an improvement on previous local ceasefires because it was directly negotiated by Syrians, rather than involving outside states. "Some people are talking about 40-50 local ceasefires waiting on the shelf to be discussed," the diplomat said. -Reuters