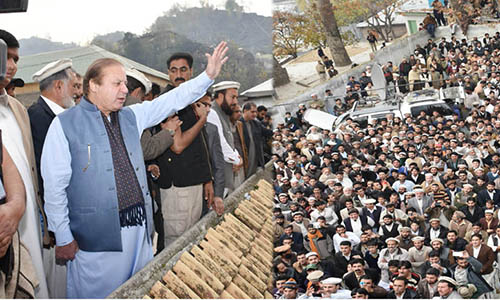 UPPER DIR (92 News) – Prime Minister Nawaz Sharif has said that they will eliminate loadshedding within two and a half years. Addressing a ceremony to distribute cheques among the earthquake victims on Thursday, he said that they would not take rest till the rehabilitation of the earthquake victims. “We will also bring prosperity in quake-hit areas like other parts of the country,” he said. “People will soon get rid of loadhsedding.” The prime minister said that the distribution of compensatory cheques among would complete this month. He said that there would be no shortage of gas after two and a half years. He also announced to construct a road from Chitral to Chakdra, saying that it would be linked to Central Asia. Nawaz Sharif said that the Lowari Tunnel would complete next year.