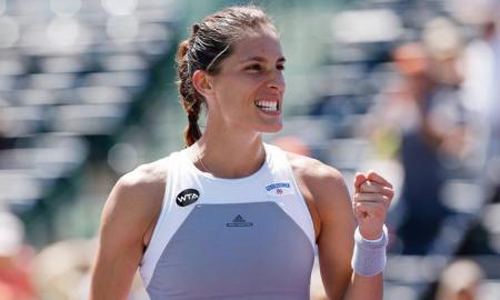 MIAMI - Germany's Andrea Petkovic booked her place in the semi-finals at the Miami Open after a 6-4 6-2 win over 14th seeded Czech Karolina Pliskova on Tuesday. Petkovic made a blistering start, going up 4-1 in the first set but the 23-year-old Pliskova powered her way back to 4-4 and then had three break points - all of which the German saved. Petkovic, the 2011 Miami semi-finalist, won the next five games and wrapped up the match in one hour 13 minutes. "I was playing really well at the start but I couldn't see the ball on my serve with the sun on one side and I was struggling," said Petkovic. "Karolina also started playing really well and I was a little lucky at the end of the first set. But then I got better and better from there," she said. In the last four, Petkovic will face the winner of Tuesday's other quarter-final between Venus Williams and Carla Suarez Navarro. - REUTERS