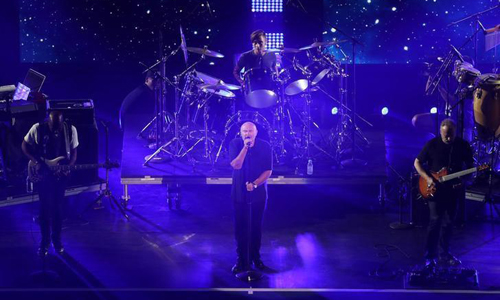 LONDON- British musician Phil Collins is returning to the stage with his first set of live shows in nearly 10 years, saying his children helped him cut his retirement short.
Collins, who announced in 2011 he was bowing out of music, will perform for five nights at London's Royal Albert Hall next June before heading to Cologne and Paris where he will play two concerts in each city as part of his "Not Dead Yet: Live" shows. Collins, 65, came to fame as the drummer and later lead vocalist for progressive rock band Genesis and is known for solo hit singles such as "Another Day in Paradise" and "In the Air Tonight". He last toured in 2007. "They all kind of (said) 'You should get out there Dad, you should get out there and keep doing it.' They thought my retirement was a little premature but I also really did want to stop to be with the kids and be a dad. Now I am a dad, I can leave," Collins told Reuters in an interview on Monday. "People were talking to me over the last couple of years and saying 'We miss you, nobody does really what you do and it would be great if you came back and did some shows.' These kind of comments started to weigh up with me." Collins has enjoyed a successful solo career, winning Grammys, Brits as well as an Oscar. "It'll be fun... I've been away long enough for a greatest hits tour not to bore people," Collins said. "I think, fans...(will) be happy listening to the stuff they're familiar with and obviously there'll be some things in there that will be surprises." Collins performed last year at an event for his Little Dreams Foundation and also sang at the U.S. Open in August. In an earlier news conference, Collins, who is also releasing his "Not Dead Yet: The Autobiography" memoirs, touched upon injuries sustained during years of drumming, saying he had back surgery and was undergoing therapy. He also spoke about his battle against alcoholism. "I just felt I should write about this because this is the Phil Collins that people think is kind of invincible and squeaky clean. I just felt better for writing about it and also it may help someone..., maybe give people courage to talk about it." -Reuters