Philippines, US exercises near disputed sea not "show of force" 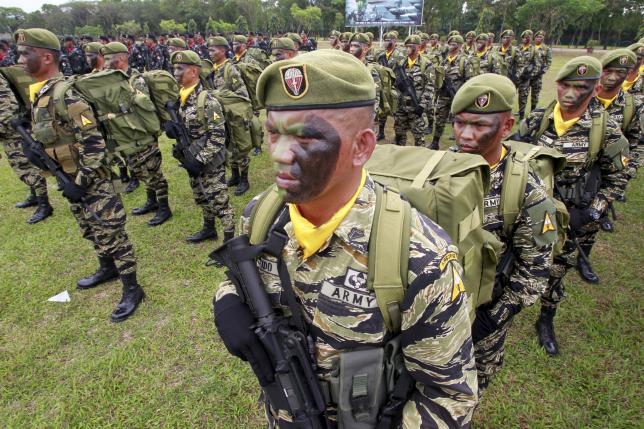 Philippines, US exercises near disputed sea not "show of force"

MANILA - About 11,500 US and Philippine troops will take part in annual military exercises this month near disputed waters in the South China Sea, the Philippine military said on Tuesday, while denying the drills were a show of force to China. The number of troops taking part in the exercises will be the largest since the allies resumed joint military exercises in 2000. The Philippine military said the joint exercises were not aimed at countering China, which has been undertaking land reclamation on tiny reefs and islands in the Spratly islands, which both allies say is a threat to peace and stability. "This has no direct relationship with the ongoing construction of structures, not a show of force," said military spokesman Lieutenant-Colonel Harold Cabunoc. "The joint exercises are designed to increase our capability to defend our country from external aggression. It is to test how ready and how effective we can operate with our American allies in both humanitarian and security operations." China claims most of the potentially energy-rich South China Sea, through which $5 trillion in ship-borne trade passes every year. The Philippines, Vietnam, Malaysia, Brunei and Taiwan also have overlapping claims. China has rejected diplomatic protests by the Philippines and Vietnam and criticism from the United States over its reclamation work on reefs and tiny islands, saying it falls "within the scope of China's sovereignty". More than 5,000 Filipino and 6,000 American soldiers will take part in the 10-day exercises on western Palawan island, Zambales, and Pampanga provinces. The number of troops is more than double the number of participants last year. - Reuters