Bothe the leader exchange ideas and seek council on constitutional, political and lawful quandaries during the meeting. The prime minister said the government was squarely focused on ridding the country of it’s economic challenges in the meeting.

“We will soon be out of these difficult times,” assured PM Khan. He also told Awan about tough yet important decisions the government had to take in the larger interest of the nation, national interest trumps political ambitions for the current regime.

On the occasion, Babar Awan said, “The country has stood with it’s Prime Minister in testing times.” “Survey results and popularity polls are a testament to the nation being firmly behind the decisions being made at the top,” Awan opined.

The former PPP senator also slammed previous governments, admonishing them for looting and plundering the country’s resources during their respective tenures. He stressed that accountability for ills of the past is the need of the hour. 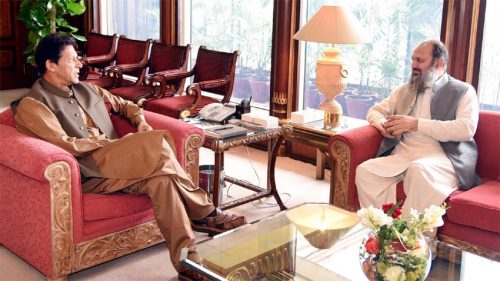 In a tweet today on behalf of Pakistani people and government, Special Assistant on Information and Broadcasting Firdous Ashiq Awan has expressed gratitude to the Crown Prince of United Arab Emirates Mohammed bin Zayed for releasing 572 Pakistani prisoners.