According to a notification, the touring Proteas will be enjoying the privileges from January 15 to February 15. 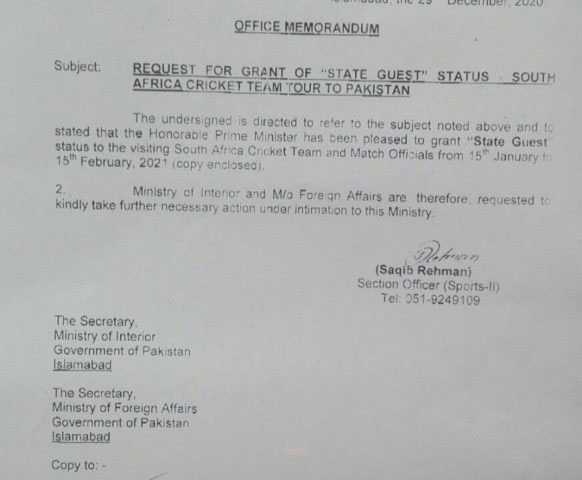 The Proteas, who are touring the country for the first time in 14 years, will play two Tests and three T20Is against the Green Caps.

The tour begins with the first Test on January 26 in Karachi. Rawalpindi will host the second game on February 4 while Lahore will stage three 20-over games on February 11, 13 and 14.

The visitors will go into quarantine following their arrival on January 16.

They will be cleared to stage intra-squad matches and practice sessions as part of preparations after testing negative for the coronavirus.

ISLAMABAD (92 News) - Prime Minister Imran Khan will virtually address the 4th Session of the United Nations Conference on Trade and Development Intergovernmental Group of Experts on Financing for Development today.

No one will be allowed to create hurdles in process of development: Buzdar

LAHORE (Web Desk) - Punjab Chief Minister Sardar Usman Buzdar has said that no one would be allowed to create hindrance in the process of development and progress being carried out under the leadership of Prime Minister Imran Khan.