According to the details issued by Pakistan Tehreek-e-Insaf (PTI) spokesperson Fawad Chaudhry, the cabinet includes fifteen ministers and five advisors. Cabinet members will take oath at the President House in Islamabad on Monday.

The cabinet has 10 ministries divided among Pakistan Tehreek-e-Insaf (PTI) members while some of the ministries also went to PTI’s allies, the MQM-P, AML and PML-Q.

The portfolio of Finance & Economic Affairs Ministry will be given to Asad Umar while Shah Mehmood Qureshi will be the Minister for Foreign Affairs.

Aamir Mahmood Kiani will be given the portfolio of National Health and Services, Defence Minister will be Pervez Khattak.

Dr Farogh Naseem will be the Minister for Law and Justice, Chaudhry Tariq Bashir Cheema for States and Frontier Regions while Dr Fehmida Mirza will be Minister for Inter Provincial Coordination. 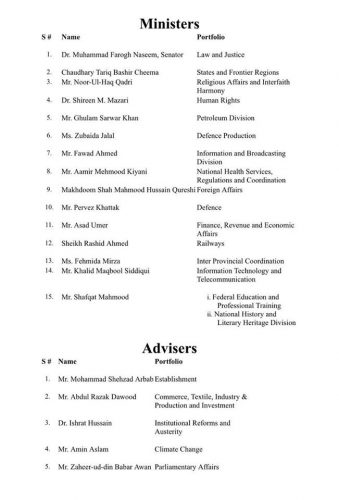