RAWALPINDI (92 News) – Prime Minister Imran Khan has said that he will not give the NRO to anyone even whichever king they get to recommend for them.

Speaking at the inauguration of Rawalpindi-Karachi bound Sir Syed Express at Rawalpindi Station on Wednesday, he said that he would not spare those who looted the country. “After Panama, cases were instituted against me, but the Supreme Court declared me ‘Sadiq’ (credible) and ‘Amin’ (trustworthy),” he said.

PM Imran Khan said that if Asif Zardari and the Sharif family bring a half of their looted wealth in the country dollar will come down against rupee. 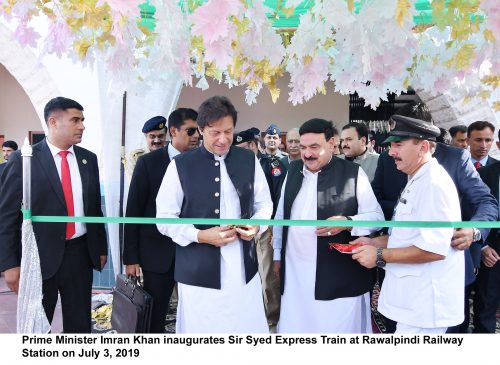 He congratulated Minister for Railways Sheikh Rashid and his ministry for launching the new train. “Sheikh Rashid is passionately trying to improve the railway,” he added.

The premier said that Pakistan Railways had given 1,000 stalls to Ehsas Program which is aimed at raising the poor. “The railway was facing a deficit of Rs36 billion. The minister has reduced the deficit to Rs32 billion despite an increase in the oil prices,” he said.

PM Imran Khan said that there is no dearth of resources in the country. “A country becomes poor due to corruption. The objective of corruption is to take away the wealth of the poor,” he maintained.

He said that foreign debts soared to Rs30,000 billion from Rs6,000 billion during the last 10 years.

PM Imran Khan said that Naya Pakistan was in the making as no one before him dared to arrest looters, and only the poor were nabbed by law enforcement authorities.

Federal Minister for Railways said that 24 new trains had been started during last nine months, while the deficit reduced by Rs4 billion.

He claimed that the railways had earned 700,000 additional passengers in last nine months and all the booking for Eidul Azha had been completed. He said that the ticket for senior citizens of aged 65 years has been slashed to a half, while elderly people of aged 75 and above will be given four free tickets in a year.