DOHA (92 News) – Prime Minister Imran Khan on Tuesday said that those sending money to Pakistan are ‘heroes’ and those doing money laundering are ‘villains’ of the country.

Addressing overseas Pakistanis in Doha, Imran Khan said that when PTI government was sworn in, it was just like four wickets down for 20 runs on the board. “But I know very well how to play in pressure situation, sooner the Green Passport will regain its position in the world,” he contented.

Terming Overseas Pakistani as an asset of the nation, PM Khan appreciated their contribution for uplifting the foreign reserves of the country. “I’m fully aware about the problems being faced by you [overseas Pakistanis,” Imran Khan maintained.

“Those sending money to Pakistan are ‘heroes’ and those doing money laundering are ‘villains’ of the country,” said prime minister, and added that he will continue fighting the villains of the country. 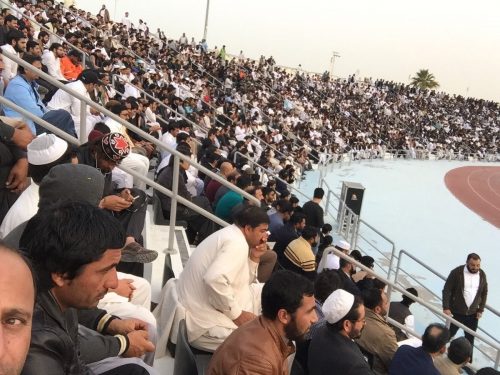 Imran Khan said a time is not far away when people will not go overseas in search of jobs as Pakistan is going to become economic hub.

PM Khan has said the government has reduced taxes to ensure ease of doing business and to attract foreign direct investment in Pakistan. He also said 36 taxes have been reduced to 16 to facilitate foreign investors.

Imran Khan vows to steer Pakistan out of crucial period

PM Imran Khan has pledge for steering country out of the present critical period. He said the government is trying it hard to overcome the massive trade deficit it inherited from the previous rulers.

Imran Khan said he has been waging war against corruption and money laundering, which will be taken to its logical conclusion.

The prime minister said no corruption scandal has so far emerged in five-month of PTI government in Pakistan. Giving example of Qatar, he said honest leadership can uplift any country of the world as it spent the money generated from the gas sector for the prosperity and uplift of the country.

Pakistan has huge potential for tourism

Imran Khan said Pakistan has huge potential for tourism and it can earn billions of dollars from this sector. He said Pakistan has fascinating beaches, snow clad peaks, religious sights of Sikhism, Buddhism, and Hinduism to attract large number of tourists from across the globe.

He said Pakistan has fascinating beaches, snow clad peaks, religious sights of Sikhism, Buddhism, and Hinduism to attract large number of tourists from across the globe.

On the other hand, the prime minister thanked Emir of Qatar Sheikh Tamim bin Hamad Al Thani for according him and his delegation a warm welcome.