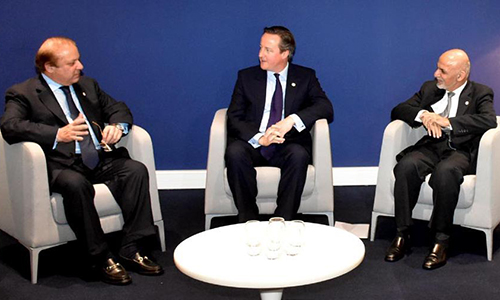 They discussed peace and reconciliatory process in the region.

Prime Minister Nawaz Sharif said that Pakistan and Afghanistan are facing the common threat of terrorism. “Pakistan is striving to eliminate the menace of terrorism,” he said.

Nawaz Sharif said that peace and stability in Afghanistan was their top target.

He said that Pakistan is committed to establishing long-term partnership with its neighbors.

He offered cooperation in the reconciliation process comprising of Afghan people.

The Afghan president expressed the resolve to establish friendly relations with Pakistan. They also shook hands and inquired each other’s well-being.