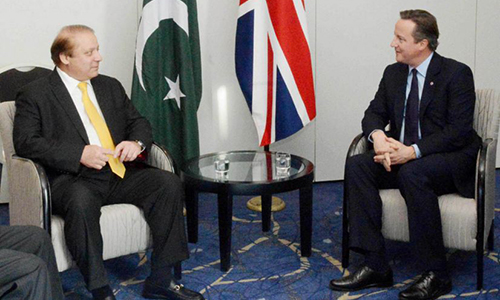 MALTA (92 News) – Prime Minister Nawaz Sharif met with his British counterpart David Cameron on the sidelines of the Commonwealth Heads of Government Meeting (CHOGM) in Malta on Friday. During the meeting, he said that Pakistan is ready to hold unconditional talks with India. “We want peace and good relations with our neighboring countries,” he said. The prime minister said that a significant reduction in terrorism had been witnessed after the success of Operation Zarb-e-Azb. The two leaders agreed to continue close collaboration in diverse fields particularly trade, investment and security. They also expressed long-term commitment to work together for greater security and prosperity of their countries. Meanwhile, Prime Minister Nawaz Sharif also met with several world leaders, including Prince of Wales Charles Philip Arthur George. Later addressing a session on climatic change, Prime Minister Nawaz Sharif said that climatic change is a big threat to human lives across the world. “Pakistan is being badly affected by climatic change,” he added. He said that they were facing the challenges of melting of glaciers, floods and increase in the sea level He called for cooperation for developing countries to deal with climatic changes.