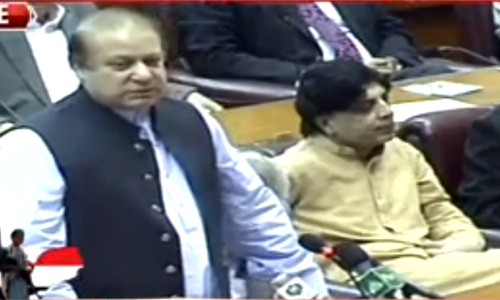 ISLAMABAD – Prime Minister Nawaz Sharif on Tuesday called for Iran to get involved in a debate on security in Yemen as parliament resumed debate on whether Pakistan should join a Saudi-led campaign against Iran-allied Yemeni forces. Sharif addressed parliament a day after the defence minister revealed Saudi wanted Pakistani warplanes, warships and soldiers. Not a single MP has spoken in favour of sending troops. "Iran should also join the discussion and evaluate whether their policy is correct or not," he said. The prime minister said that they are not looking for the mandate, adding that they have just gathered here for discussion over the Yemen issue. He said that the session has been convened for consultation, not for getting the mandate. He said that a policy on the Yemen issue will be formed after consulting all leaders. "The issue of sending troops to Saudi Arabia is sensitive one. We will form the policy after consulting all members." The prime minister said that they had not come to get the mandate through deceit. "If we get involved in Yemen, a huge blaze will once again erupt in our country," veteran opposition lawmaker Ghulam Ahmed Bilour told parliament. "My army is not a rent-an-army," he said. Aitzaz Ahsan, Senate leader of the opposition, demanded that the government clarify its position. "What does (Defence Minister) Khawaja Asif mean by the violation of sovereignty of Saudi Arabia and the strong response from Pakistan?" he asked. "If the government wants to send troops to Yemen or Saudi Arabia, what will their exact mandate be?" Talking to the media outside the Parliament House, PTI vice-chairman Shah Mahmood Qureshi said that they condemn the attitude of Kh Asif. He said that Kh Asif had uttered unparliamentary language in the parliament yesterday. The PTI members attended the session, while party chairman Imran Khan was not present. Jamaat-e-Islami ameer Sirajul Haq said that the friendship with Saudi Arabia is not of the government, but the people. “The US and Israel will reap benefit from the war in Yemen.” He said that Pakistan should play its role. "The Yemen issue should be resolved internally." He said that the government and people of Pakistan are ready to defend Khana Kaba. The PML-N members chanted the slogans of 'Dekho Dekho Kaun Ayya; Sher Ayya, Sher Ayya' on the arrival of Prime Minister Nawaz Sharif in the parliament. Senator Farhatullah Babar said that the return of the PTI members is neither a success nor a defeat of any party. "It is success of democracy and parliament." He said that Yemen conflict is a civil war. "It is not a sectarian war. Saudi Arabia has not been attacked. Yemen has been attacked instead." Farhatullah Babar said that they should not repeat the mistakes of the past. The joint session has been postponed until 10:30am on Wednesday. –92 News/Reuters