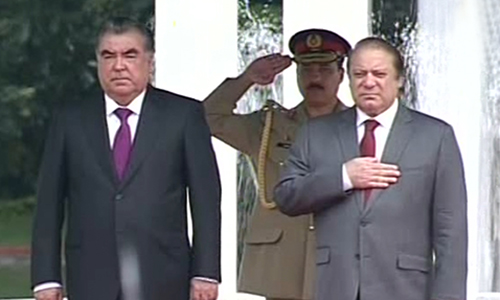 ISLAMABAD (92 News) – Tajikistan President Emomali Rahmon has on Thursday been given official reception at the Prime Minister House in Islamabad. The Tajik President was given a guard of honor, while National anthems of the two countries were also played. Pakistan and Tajikistan held delegation level talks to explore ways to promote bilateral cooperation in diverse fields. The two sides discussed ways and means to enhance cooperation in energy, security, trade, cultural and communication fields. During the meeting they exchanged views to increase contacts on people to people basis between the two countries and exchange of delegations. They also discussed matters relating to counter terrorism and controlling human and drug smuggling.