Addressing the All Parties Conference on Thursday, the prime minister said that a parliamentary committee consisting of representation from all political parties has been constituted to remove reservations of the opposition.

He said that the resources will be allocated for the project in the next fiscal year.

The prime minister announced that the western alignment of the corridor from Khunjrab to Gwadar will be completed first on priority basis. “Under the project, Hassanabdal, Mianwali, Dera Ismail Khan, Zob, Quetta, Kalat, Nag, Bisma, Panjgur adn Turbat will be connected to Gwadar. Work will be immediately started at the Mughalkot-Dera Ismail Khan section,” he maintained.

Earlier addressing the first session, PM Nawaz Sharif said the mega project will prove a milestone for Pakistan. “The investment pouring in from China is unprecedented in the history of Pakistan and credit for this goes to all the political parties.”

He appreciated the law enforcement agencies and the Sindh government for nabbing the culprits of terrorist attack on Ismail community in Karachi. He said the culprits should be given exemplary punishment and it will be seen as to who is behind these elements. 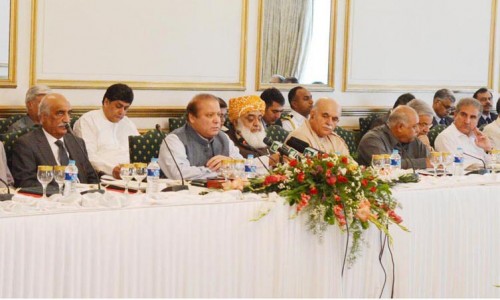 Briefing the parliamentary leaders about different routes of the project, Minister for Planning and Development Ahsan Iqbal said the project will benefit all the provinces.

“Gwadar will be connected with Kasghar through three different routes,” he said, adding that the project is not mere the name of a road but it envisages establishment of industrial zones and power projects. “Most of the power projects under the corridor will be established in Sindh.”

The minister said the project will attract more tourists to Gilgit-Baltistan.

Minister for Railways Khawaja Saad Rafique also briefed the meeting about the plan of connecting Gwadar to Kashghar through rail network.