ISLAMABAD (92 News) – Prime Minister Nawaz Sharif has recommended Sitara-e-Pakistan for ambassadors of Norway and Philippines and Sitara-e-Imtiaz for the wives of ambassadors of Malaysia and Indonesia killed in the Naltar tragedy.

He was speaking at a condolence reference at Foreign Office on Monday.

Prime Minister Nawaz Sharif said the government and people of Pakistan stood by entire diplomatic community in the hour of grief.

He said he had already given instructions for transportation of mortal remains of the deceased and medical treatment to the injured on immediate basis.

“The Foreign Office has also been directed to liaise with its missions abroad and relevant departments to ensure speedy and timely completion of all formalities. The diplomats, killed in the Naltar incident, were strong supporters of closer relations between Pakistan and their countries,” he maintained. 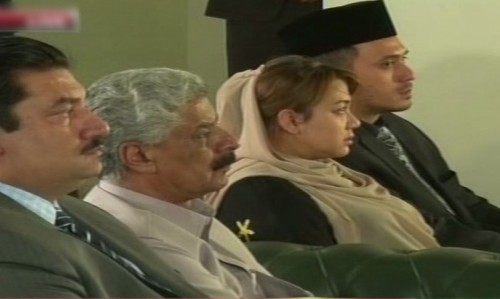 Earlier, Foreign Secretary Aizaz Ahmad Chaudhry said that it was a loss which no one can describe, especially for the Foreign Office, as they had developed such a close and warm friendship with the deceased.

He read out obituaries of the four members of the diplomatic community killed in the helicopter crash.

Dean of the Diplomatic Corps and Ambassador of Argentina Rodolfo Martin Saravia said the tour of diplomats was arranged on his request to appreciate beauty of the northern Pakistan and pay tributes to those engaged in operation Zarb-e-Azb.

He stated that the accident was caused by technical and mechanical failure of helicopter. “There is no possibility of terrorism or sabotage.”

He thanked the Pakistan government for support and facilitation both in Gilgit and Islamabad extended to affected people.

A one-minute silence was observed by the participants of the reference in memory of those killed in Naltar copter crash.

Meanwhile, Prime Minister Nawaz Sharif met three bereaved families of the Naltar incident, including those from Norway, Malaysia and Indonesia at the Foreign Office.

He expressed grief and sorrow over the tragic Naltar incident. “It is a tragic time. Our hearts go out with the bereaved families,” he said.