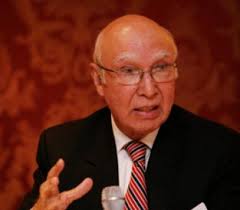 ISLAMABAD (92 News) – Prime Minister Nawaz Sharif will be raising the issue of Indian intelligence RAW’s issue at the United Nations General Assembly session in September. This was informed by Adviser on National Security and Foreign Affairs Sartaj Aziz during the session of the Parliament on Friday. “The PM will raise the issue of Indian agency RAW's involvement in Pakistan especially in the province of Balochistan and FATA with the United Nations and other international forums,” he said, adding that during the foreign secretary level talks held in March this year, the foreign secretary had raised the issue with the Indian counterpart. Replying to a supplementary question, he said the government has already condemned the recent terrorism incident took place in Gurdaspure India and rejected the Indian allegations of Pakistan's involvement in it. “It has been made clear that Pakistan has the capability to give befitting reply in case of any threat from Indian side,” he said.