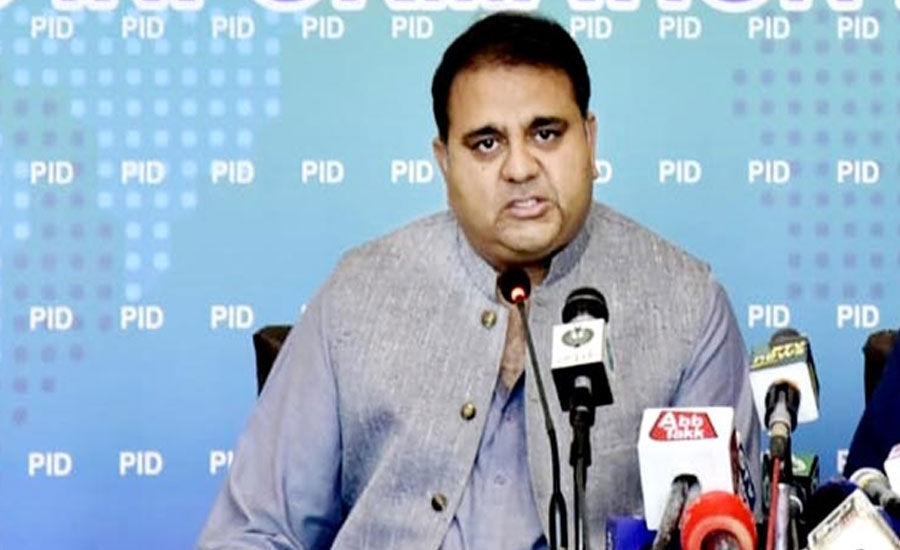 ISLAMABAD (92 News) - Minister for Information Fawad Chaudhary on Tuesday has said that the PML-N opposed the immigrants' right to vote.

The minister said while briefing to journalists about decisions taken in the federal cabinet that met in Islamabad today under the chair of Prime Minister (PM) Imran Khan.

Fawad Chaudhry said that the PML-N has filed a petition in the court to deprive the overseas Pakistanis of their right to vote while it is among our top priorities to give them basic right of voting. "We consider the overseas Pakistanis an integral part of the country. We are waiting for PPP's response in this regard to finalise the legislative procedure," he maintained.

The minister also said that he federal cabinet ratified the decisions of the privatization committee. "PTV was not allowed to sign the agreement with the Indian broadcaster, however, Pakistani fans will deprive from watching Pakistan-England matches series," he added.

Fawad Chauhdry has said that the demonstration process of Electronic Voting Machine, under government's electoral reforms agenda, will be completed within a week. "We have ordered 500 EVMs for trials in the elections of Bar Councils and press clubs. He said all the 36 conditions of Election Commission of Pakistan have been fulfilled in initial trials of the EVMs. The EVMs are being manufactured by three companies."

The federal cabinet prayed for the martyrs of Ghotki train accident and victims of a Pakistan origin family in Canada. He further said that the incident of Canada vindicates Prime Minister Imran Khan's reservations regarding rising trends of Islamophobia in the West. Condemning the incident, the cabinet stressed on western countries to take immediate steps to root out the major cause of Islamophobia.

The prime has directed the Minister for Maritime Affairs Ali Haider Zaidi to finalise the reforms in transportation and logistics. The Law Minister Farogh Naseem briefed the cabinet about reforms in criminal law.

The cabinet approved the Corona relief package for Tajikistan to help fight against the pandemic. The cabinet also accorded the approval to record the National Anthem of Pakistan in modern vogue.

Ready to negotiate with opposition

To a question, Minister for information said they are ready to negotiate with opposition but there would be no compromise on bargaining with corrupt elements. Chaudhary Fawad Hussain said it is condemnable that PML-N does not want to give right of vote to the overseas Pakistanis.

The minister said Mubashir Hassan has been appointed as Managing Director of Associated Press of Pakistan.  He told that Tariq Malik has has re-oppointed as Chairman NADRA.