“The NAB has become Prime Minister Imran Khan’s tool that is being used for political victimisation,” Shehbaz stated in a tweet, adding that such tactics could not discourage them.

“Another prime minister appointed by your votes arrested. Will this injustice, insult be faced by those elected by your votes,” wrote Maryam Nawaz Sharif on her Twitter account.

The PML-N leader questioned that will lawlessness, humiliation and injustice be the fate of all those who are elected by vote.

“An elected representative is just a victim of a photocopied page of a notorious institution,” she said.

PML-N leader Ahsan Iqbal and Marriyum Aurangzeb also harshly condemned the arrest of Khaqan Abbasi and declared the day as black in history of Pakistan.

“There is not dictator could become as Hitler and you are trying to do this even a ‘selected’,” they crirticized the prime minister. “You have to be answerable in the history of Pakistan,” they added.

Shahid Khaqan Abbasi’s arrest was confirmed by PML-N leader Ahsan Iqbal. Iqbal confirmed that Abbasi had been taken away by NAB officials. 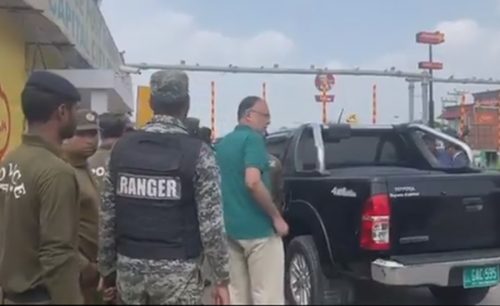 Khaqan Abbasi was travelling to Lahore with Ahsan Iqbal when he was arrested.

PML-N president Shehbaz Sharif condemned the arrest, stating that NAB was being used for political victimisation.