In the application, it stated that the party wants Saad Rafique to attend the ongoing session of the National Assembly.

On the other side, the delegation of the PML-N met with Punjab Assembly Deputy Speaker Dost Muhammad Mazari. They submitted an application to the PA deputy speaker for issuance of production order of Khawaja Salman Rafique.

Dost Mizari explained that he has no authority to issue production order. However, he also replied to the PML-N delegation that the matter would be implemented according to the law.

Earlier today, the NAB officials arrested Khawaja Saad Rafique and his brother Khawaja Salman Rafique after the Lahore High Court (LHC) cancelled their plea for extension in pre-arrest bail. After their arrest, they have been shifted to NAB Lahore office. 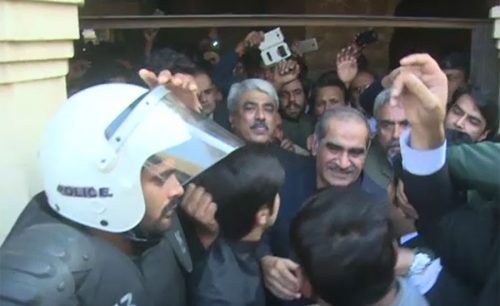 A two-member bench headed by Justice Tariq Abbasi heard the plea. Azam Nazir Tarar and Khawaja Amjad Pervaiz, counsels for the Khawaja brothers, said that the NAB had not provided proofs. At this, the court extended their bail until December 13.

They prayed that the case be adjourned for a week. However, the court rejected the extension in bail and ordered to complete the arguments today.

The counsels argued that the NAB had arrested one of the accused and recorded his statement under section 164 and they are not being provided a copy of the statement.

The court observed that a copy of the evidence cannot be provided to the accused. The NAB prosecutor told court that they had issued their arrest warrants after fulfilling all requirements.

He said that three inquiries – Paragon, Ashiana and Pakistan Railways – are pending against Khawaja Saad Rafique with the NAB.

On the other hand, Khawaja Saad Rafique and Khawaja Salman Rafique said that the corruption allegations were baseless and they had fully cooperated with the NAB.