According to Pakistan Navy, naval and air attaches of Pakistan as well as representatives of Royal Bahrain Naval Forces welcomed the Pakistani ship.

They discussed matters of mutual interest and bilateral cooperation. Naval ships of the two countries took part in sea drills at the end of visit.

The purpose of this exercise was to improve various skills and war maneuvers. 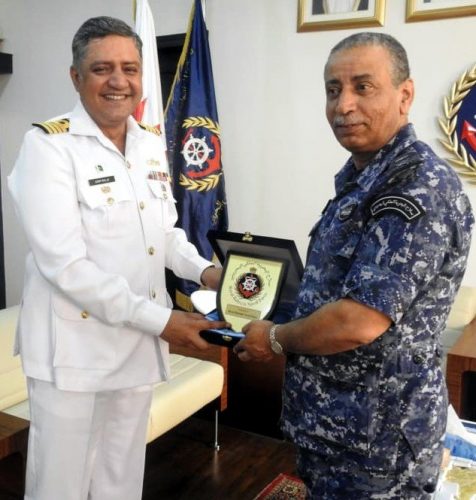 On Thursday, Pakistan Navy (PN) took over the command of Combined Maritime Task Force-150 (CTF-150) for the 11th time from Royal Canadian Navy at an impressive change of command ceremony held at Headquarters US NAVCENT, Bahrain.

According to the Navy’s spokesperson, Commodore Alveer Ahmed Noor of Pakistan Navy took over the command of CTF-150 from Commodore Darren Garnier of Royal Canadian Navy.

Addressing the ceremony, Commodore Alveer Ahmed Noor assured that his team was fully geared up to shoulder this prestigious responsibility.

According to the Navy’s spokesperson, Noor said that relations between Pakistan Navy and coalition navies were time tested and were being continuously strengthened due to their focused commitments in support of collaborative maritime security in the region.

On the occasion, Commodore Alveer Ahmed Noor said, “Pakistan Navy have the distinction of commanding TF-150 for 10 different times prior to present command which is manifestation of the trust and respect reposed in Pakistan Navy by the coalition partners.”

Pakistan Navy seizes around 1000kg of hashish near Ormara

Earlier, Pakistan Navy has confiscated around 1000kg of hashish worth over 2.5 billion rupees near Ormara in the open sea.

The Navy conducted the intelligence based operation on the basis of permanent surveillance and mutual cooperation with the Anti-Narcotics Force (ANF), the spokesman said.