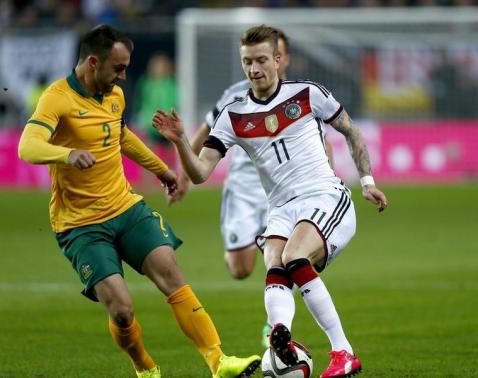 KAISERSLAUTERN - Substitute Lukas Podolski grabbed an 81st-minute equaliser to rescue a 2-2 draw for 2014 World Cup winners Germany in an entertaining friendly against Asian champions Australia on Wednesday. Podolski, who has been mainly on the bench for Inter Milan recently, stroked the ball home from close range with his left foot nine minutes after coming on to score his 48th goal for his country. Socceroos captain Mile Jedinak had made up for gifting Germany the lead by putting his side 2-1 up with a brilliant curling free kick in the 50th minute. Earlier, Marco Reus gave the hosts a 1-0 advantage before James Troisi levelled. "It was a bit hectic," said Germany coach Joachim Loew. "We had some good chances to make it 2-0 or 3-0. "Sometimes in friendly matches you are missing a few percentages," said Loew who rested several players including Bastian Schweinsteiger, Mats Hummels and Jerome Boateng. Australia, who won their maiden Asian crown in January, were in no way intimidated early on while the Germans struggled with an experimental three-man defence. The visitors had a good chance in the opening seconds as Nathan Burns raced clear but he was denied by a last-gasp tackle. LECKIE MISS Ilkay Guendogan, fit again after a back injury and making his first international appearance since August 2013, responded for Germany with a long-range effort. Matthew Leckie then should have put Australia ahead in the ninth minute when he twice shook off Benedikt Hoewedes and fired wide. Hoewedes, Shkodran Mustafi and Holger Badstuber had never played together before and it showed as they were repeatedly left chasing shadows. Germany, however, had no such problems in attack when Sami Khedira pounced on a mistake by Jedinak and sent Reus through to open the scoring. Jedinak almost handed the world champions a second goal but this time Reus' effort was saved by Matt Ryan. The Australians then started to pour forward and Troisi equalised with a bullet header from a cross by Burns. "I hope this sheds us of any inferiority complex we may have about ourselves," said visiting coach Ange Postecoglou. "I am super proud. We threw the boys some big challenges today and they were up to it." Germany travel to Georgia for a Euro 2016 qualifier on Sunday while Australia meet Macedonia in a friendly on Monday. - Reuters