ISLAMABAD (92 News) – IGP Islamabad Muhammad Aamir Zulfiqar Khan has cancelled the leaves of the police officers ahead of the JUI-F’s Azadi March.

A notification has been issued in this regard. 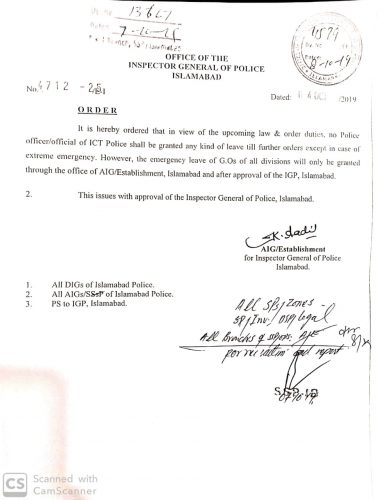 The leaves have been cancelled to control the law and order. However, the IGP will approve the holiday in the wake of an emergency.

On October 7, the government had decided to take legal action against JUI-F chief Maulana Fazalur Rahman after his announcement of the lockdown in Islamabad on October 27. The decision was made during a meeting between Federal Minister for Kashmir Affairs and Gilgit-Baltistan Ali Amin Gandapur and Babar Awan.

Gandapur said that the so-called Azadi March will suffer a defeat. “The march will further expose Maulana Fazalur Rahman before the nation,” he said.

The minister said that the people will foil the personal agenda of Maulana Fazalur Rahman. “Maulana should not use the seminary students for his ulterior motives,” he said.