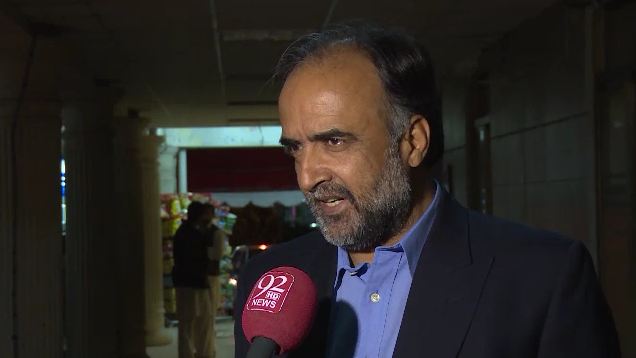 ISLAMABAD (92 News) – Political leaders of all parties across the country on Sunday slammed the Mutthida Qaumi Movement chief Altaf Hussian’s disparaging remarks about armed forces and inviting foreign forces’ attack. Talking to 92 News regarding legal action against MQM chief, Pakistan People’s Party leader Qamar Zaman Kaira said that the stance of Interior Minister Chaudhry Nisar was right, adding that no political party should invite foreign forces to attack Pakistan. Meanwhile, Awami Muslim League chief Sheikh Rasheed said that MQM chief Altaf Hussain should review his remarks, adding that government should ask British government to take action against Altaf Hussain. He suggested the MQM chief should give statement against armed forces to create problems for Muhajirs. On the other hand, Pakistan Tehreek-e-Insaf spokesman Naeemul Haq said that nothing should be expected from Altaf Hussain, adding that Pakistan should take action against him. Meanwhile, Pir Pagara demanded an investigation into the allegation of the MQM receiving funds from Research and Analysis Wing (RAW). PTI chief Imran Khan said that the MQM chief’s hate speeches prove his relation with the Indian spy agency.