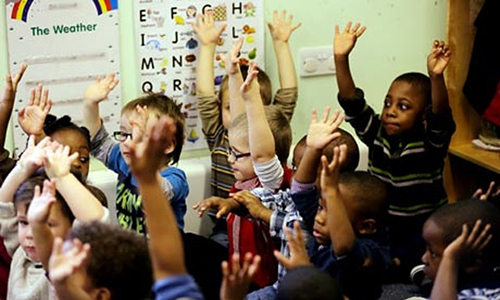 MONTREAL – The more time low-income children spend in daycare, the better they’re likely to be doing in school at age 12, a Canadian study suggests. While previous research has linked high quality daycare centers to better academic performance, the current study focussed on whether daycare might help reduce or eliminate income-based disparities in achievement through adolescence. Researchers found that children from low-income families who spent the most time in center-based care scored 37 percent better on reading and writing tests and 46 percent better on math exams at age 12 than similar kids who logged the fewest hours in daycare centers. "Children from disadvantaged families who remain at home have double risks – they evolve in a home environment that is less stimulating than that of non-disadvantaged children and they are not exposed to the learning experience that most children receive by going to child care," senior author Sylvana Cote, of the University of Montreal in Canada, said by email. Cote and colleagues studied more than 1,000 families with babies born in Quebec in 1997 and 1998. When the children were age 12, the researchers sorted them into two groups – one for the 25 percent of kids from the lowest income families, and another for everyone else. For the low-income children, having attended daycare for more than 35 hours a week was associated with better academic achievement in all disciplines at age 12, the study found. The earlier the children started daycare, the better their school performance. Those who started attending child care centers by 5 months had better reading, writing and math scores at age 12 than kids who never attended daycare. In fact, those who entered daycare as babies were performing at the same level as children from higher socioeconomic-status families, the researchers report in the journal Pediatrics. However, the low-income kids who started attending daycare centers after age 18 months only had better reading and math scores. Moreover, daycare wasn't linked to achievement gains for children from the more affluent 75 percent of families in the study. One limitation of the study is that families’ socioeconomic status can change over time, the authors acknowledge. It's also possible that families choosing full-time daycare from infancy might be different in other ways from families who put kids in daycare later or keep children home until they start school. And not all child care centers provide high-quality care, which depends on well-trained teachers and enough staffing to provide plenty of personal attention to children, Gosta Esping, a researcher at Pompeu Fabra University in Barcelona who wasn't involved in the study, said by email. Previous research has suggested that good child care centers can help kids develop a wide range of cognitive and behavioral skills that can serve them well in school, said Kevin Fiscella, a researcher in public health and community health at the University of Rochester Medical Center in New York. "Low socio-economic status children may also benefit from implicit learning from peers from more advantaged backgrounds in terms of vocabulary exposure, basic numeracy, curiosity and exploration, peer to peer interactions, and modeling of emotional self-regulation," Fiscella, who wasn't involved in the study, said by email. The finding that early daycare may have benefits that extend into adolescence is striking, said Jane Waldfogel of Columbia University School of Social Work in New York, who wasn't involved in the study. "Child care has a strong beneficial effect for that group," Waldfogel said by email. "These programs are a good investment – they pay large dividends in reducing inequalities." –Reuters