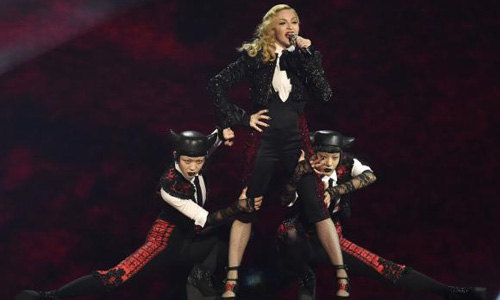 NEW YORK (Reuters) - Madonna will begin an international tour to promote her new album "Rebel Heart" with a concert at the American Airlines Arena in Miami in August, her promoters, Live Nation, said on Monday. The Aug. 29 show will kick-start the North American leg of the tour that will include appearances in New York, Boston, Chicago, Philadelphia, Vancouver and San Juan, Puerto Rico. The 56-year-old pop star will begin the European and British segment of the tour with a concert in Cologne, Germany on Nov. 4 followed by dates in London, Paris, Barcelona and other cities. Concerts in Australia and Asia will be announced at a later date, according to Madonna's website. Last week the Grammy-winning singer took a tumble on stage while singing "Living for Love," a single from the album, during a performance at the British music industry's annual Brit Awards. She fell backward down a few stairs when a flowing cape that was part of her matador costume failed to loosen. The singer regained her composure and continued the performance. During a taping of "The Jonathan Ross" show that will air on March 14 on Britain's ITV network, Madonna said the fall was not a publicity stunt. She added that she had suffered a bit of whiplash and had hit her head. Last December early demo tracks from "Rebel Heart," Madonna's 13th studio album, were leaked ahead of its release next week. An Israeli man was arrested on suspicion of hacking into the computers of Madonna and other singers. Madonna responded to the hacking by releasing six tracks from the album for purchase on iTunes in December.