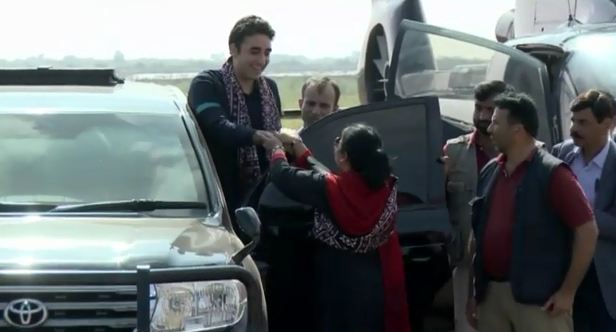 THATHA (92 News) – Pakistan People Party (PPP) Chairman Bilawal Bhutto Zardari has on Sunday led a massive rally of thousands of party’s die-hard supporters from Sijawal town of Sindh to Thatha. Pakistan People’s Party leaders Nisar Khuhro and Shehla Raza have received the party chairman upon his arrival at Sijawal. A large number of party workers were also present on the occasion. Bilawal Bhutto Zardari came out of his vehicle and waved to the party workers. The rally completed 30 kilometer’s distance in six hours. Strict security arrangements were made on this occasion. Meanwhile, a party’s die-hard female worker has broken the security barrier to have a glimpse of Bilawal Bhutto Zardari and hold his hands.