The Chinese vice-premier had said goodbye to the prime minister at airport. Pakistan Ambassador to China Naghmana Hashmi was also present.

Before his departure, Prime Minister Imran Khan was presented the guard of honour.

Recalling the joint statement of November 4, 2018, which outlined the important bilateral consensus between Pakistan and China, the two sides reaffirmed their firm resolve to further strengthen Pakistan-China all-weather strategic cooperative partnership aimed at building a community of shared future in the new era. 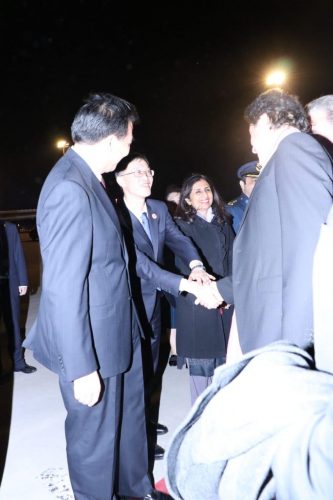 The two sides held in-depth exchange of views on deepening bilateral cooperation in the areas of trade, investment, finance, defence and security, education, agriculture, social sector, people-to-people contacts and cultural linkages. Both sides renewed their commitment to reinforce sister-city ties and were happy to note that a major event was being organized in Islamabad in November 2019 to deepen cultural cooperation and people-to-people ties between the two countries.

Both sides underlined that educational links between the two countries were becoming stronger. Prime Minister Imran Khan thanked Chinese leadership for providing opportunities to Pakistani students to study in China. He hoped that those students will play an important role in further deepening historic and deep-rooted ties between the two iron brothers.

Prime Minister Imran Khan thanked the Chinese leadership for China’s consistent support for Pakistan’s economic development. The two sides agreed that early implementation of the second phase of the China-Pakistan Free Trade Agreement would contribute to increase in bilateral trade. Both sides agreed to take full advantage of the China-Pakistan Joint Economic and Trade Commission to achieve balanced and sustainable development of bilateral economic and trade cooperation.

The leaders reviewed the excellent bilateral defence cooperation and agreed to further strength this cooperation in the areas of military exercises, training cooperation, personnel exchanges, and equipment and technology cooperation.

Reaffirming that there was no military solution in Afghanistan, the two sides agreed that peace and stability in Afghanistan was vital for regional security and expressed satisfaction at the important outcomes of the Third China-Afghanistan-Pakistan Foreign Minister’s Dialogue held in Islamabad on September 7, 2019. The Chinese side appreciated Pakistan’s efforts in promoting peace and reconciliation process in Afghanistan. Both sides maintained that an inclusive, and Afghan-led and Afghan-owned peace process would be key to bring peace and stability in the country.

Both sides reaffirmed their commitment to fight terrorism in all its forms and manifestations, and called on all countries to strengthen international cooperation on counter-terrorism. China appreciated Pakistan’s unrelenting efforts and tremendous sacrifices in countering terrorism. It supported Pakistan in implementing its National Action Plan and called on the international community to objectively recognize Pakistan’s contributions to regional peace and security through its success in fight against terrorism.

Both sides expressed satisfaction over the close cooperation between the two countries at multilateral fora and resolved to deepen strategic coordination and consultation. Both sides reaffirmed their commitment to the purposes and principles of the UN Charter, and support for multilateralism and win-win cooperation.