LONDON (92 Web Desk) – In a rather surprising turn of events, the reports claiming that Britian’s Prince William cheated on Kate Middleton with her friend related rumours have gone viral.

An American celebrity gossip ‘Touch magazine’ claimed that Prince William may have had an affair with their neighbour and former model Rose Hanbury, also known as the Marchioness of Cholmondeley.

It is pertinent to mention here that the Duke of Cambridge cheated on Middleton while she was pregnant with their third child.

He supposedly had an affair with Rose Hanbury, who happens to be a friend of his wife. But this isn’t just your standard cheating drama… there’s a lot more to it. So let’s break down the gossip:

The magazine quoted a source saying that after hearing the rumors herself, Kate immediately confronted William, who just laughed it off saying there was nothing to it. However, Kate told William to stop socialising with the Cholmondeleys.

In Touch said there is no question of the couple splitting but says the scandal has rocked the palace and their marriage.

Daily Mail and The Sun also published reports claiming that Middleton had a fall-out with her friend and told Prince William to phase her out, however, both the publications did not mention an affair or the reason for the falling out.

How did the palace respond?

Kensington Palace did not comment on the In Touch report to The Daily Beast, but courtiers said the story was totally wrong and false. The Daily Beast further reported that at least one British publication has been served with legal warnings after publishing details of the rumours.

Either way, there’s no public proof that the rumors are true, and nobody but William, Kate, and Rose really knows what went on.

Who is Rose Hanbury? 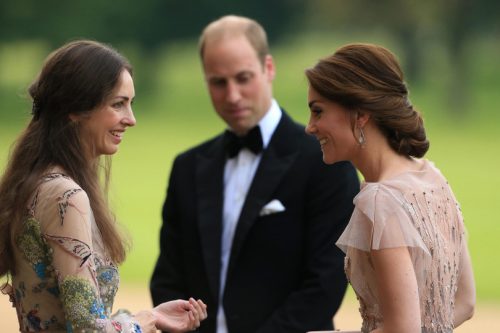 How did the rumours start?

A few weeks ago, The Sun published a story alleging that the Duchess of Cambridge and Rose had a falling out, after which Kate told Prince William to “phase” Rose out. Other British publications like The Daily Mail and Express followed suit with their own stories. However, no rhyme or reason behind it had been stated.

After that, writer Nicole Cliffe posted a Twitter thread in which she presented the theory that Prince William cheated on Kate, and that was the source of the tension between him and Prince Harry — not, as was previously reported, Meghan Markle.

In Touch then published a cover story about Prince William cheating on Kate. A source apparently told the magazine that Kate “immediately confronted” William about the alleged affair, and he “just laughed it off saying there was nothing to it.”