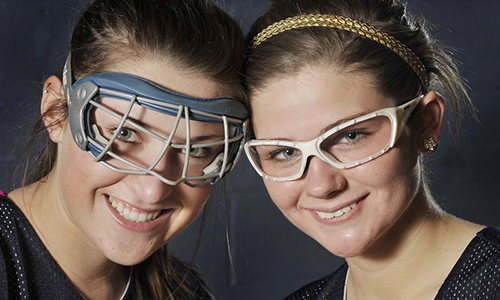 MARYLAND – A 2011 mandate requiring high school field hockey players to wear protective eyewear reduced eye injuries due to hits from balls and sticks, according to a new study. The mandate from the National Federation of State High School Associations applied only to high school field hockey players at NFHS-sanctioned competitions. Protective eyewear is still voluntary in other organizations like the National Collegiate Athletic Association (NCAA). “Although eye injuries are infrequent, they tend to be severe and, on occasion, catastrophic,” involving blindness or facial fractures, said lead author Dr. Peter Kriz of Brown University in Providence, Rhode Island. “One in 25 field hockey players reportedly will experience an eye injury over an eight-year career,” Kriz told Reuters Health by email. Researchers compared girls’ injuries in national and regional high school databases from the two seasons before and two seasons after the 2011 mandate. In 206 high schools over the four-year period, female field hockey players sustained 415 injuries to the eyes, face or head. Eye injuries included eyebrow or eyelid lacerations, bruises around the orbit of the eye, and corneal abrasions. These injuries were three times more frequent when there had been no eyewear mandate, as reported in Pediatrics. Although eye injuries among girls’ field hockey players are quite infrequent, “because of the risk of vision loss we want to reduce the risk of injury however possible,” said Andrew Lincoln, director of MedStar Sports Medicine Research Center in Hyattsville, Maryland. Eye injuries are most common in girls' basketball or softball or boys' baseball, wrestling or basketball, he said. “The use of protective eyewear is voluntary in practices and non-NFHS-sanctioned competitions, as well as at the collegiate and international levels of play,” Lincoln told Reuters Health by email. He was not part of the new study. “Given the scientific evidence demonstrating that mandatory protective eyewear effectively reduces eye injuries in field hockey players without increasing concomitant injury such as concussion, research now exists to support a policy change regarding mandatory protective equipment in field hockey at all amateur levels, including developmental, college, national, and international levels,” Kriz said. “We have relatively few published studies that demonstrate the protective effects of rule changes or protective equipment in sport,” Lincoln said. “When we obtain strong evidence as provided in this study, we should adopt the policy as widely as possible.” –Reuters