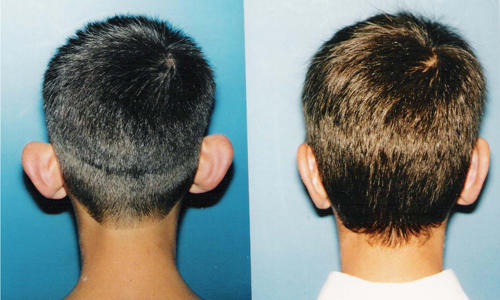 SWITZERLAND - People with ears that stick out may feel self-conscious about how others perceive them. According to a new study, though, strangers do notice the ears but don’t make negative personality judgments based on them. It was very surprising to find no such bias, according to senior author Dr. Abel-Jan Tasman of the Cantonal Hospital in St. Gallen, Switzerland. “Looking closer, though, we realized that the ‘bad cases’ with the obviously most protruding ears, the longest visual dwell time on the ears and the largest difference in dwell times between uncorrected and corrected auricles all looked cute and smart in their own way,” he told Reuters Health by email. Children develop a sharpened awareness of small differences between themselves and others, and bullying for different looks begins after the age of five or six, Tasman said. Parents’ fear that protruding ears lead others to make conscious or unconscious assumptions about personality is often behind decisions to alter a child’s ears surgically, Tasman and colleagues write in JAMA Facial Plastic Surgery.
To see how much people really notice protruding ears and if seeing them triggers any biased assumptions about personality, the surgeons had 20 adult volunteers look at pictures of 20 children aged five to 19. All the children’s parents had requested corrective plastic surgery for protruding ears.
The researchers also digitally altered the same pictures to make the ears sit closer to the head, and showed the images to the volunteers. The observers rated the kids in all the images on 10 personality traits by scoring them on a scale of one to 10 representing pairs of opposite extremes, such as friendly-unfriendly, creative-uninspired and honest-dishonest. People did spend more time looking at ears that stick out compared to digitally altered ears. But they rated the kids equally assiduous, intelligent and likeable regardless of ear type. In fact, when people spent the most time focusing on protruding ears in the unaltered photographs, and those images scored higher on assiduousness, likeability and intelligence than the doctored images. Four of the five kids with the most protruding ears actually scored lower on the personality scale with corrected images. “In these, the protruding ears may have added to their cuteness,” Tasman said. Deviation from socially accepted “norms” in appearance leads to penalties in perceived attractiveness, according to Dr. Lisa E. Ishii of Johns Hopkins School of Medicine in Baltimore, who was not involved in the study. In her own research, Ishii told Reuters Health by email, “we showed that a crooked nose, independent of other facial changes, caused an attractiveness penalty that was restored with straightening the nose.” She was surprised that there seemed to be no such bias for kids with protruding ears, at least for personality traits, although the authors did not strictly assess attractiveness. “However, we have not performed experiments with photos of children, and the way adults perceive children with ‘abnormalities’ is probably different than how they perceive other adults with the same abnormalities,” she said. “It is also probably different than how children view other children with same.” Looking at pictures of faces on a monitor may not be the same as looking at a person in real life, the study authors note. This was a small pilot study, not large enough to draw general conclusions, said Ishii, who wrote an accompanying editorial in the journal. Cultural context is important as well, Tasman said. In western cultures ‘dumbo ears’ may look funny to some, but in some eastern cultures large ears are considered a sign of vitality and longevity, he said. In Switzerland, cosmetic surgery to correct protruding ears is one of the most common facial plastic surgeries for children, he said. “The procedure has a very high social acceptance in western Europe, to the point of most health insurances in Switzerland (and probably elsewhere) covering part of the costs, when they should not, strictly speaking, cover costs of purely esthetic procedures,” Tasman said. “It helps to know that lop ears catch the eye, but not necessarily the imagination in a negative way,” he said. “We counsel parents that way now.” - Reuters