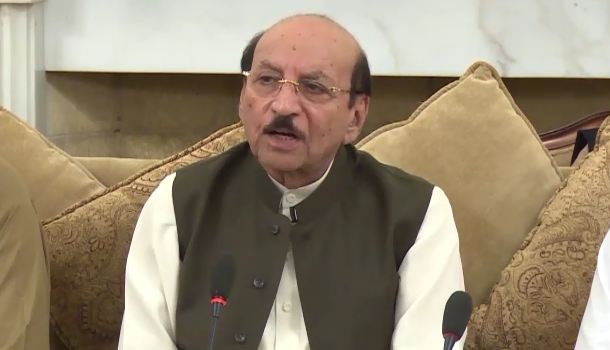 KARACHI (92 News) – Sindh Chief Minister Syed Qaim Ali Shah has on Sunday said that we do not want resentment with the federal government over Rangers special powers.

Talking to media, Qaim Ali Shah said that all provinces including Sindh have reservations over China-Pakistan Economic Corridor (CPEC) project.

He said that the PPP government has provided facilities in Thar, adding that nothing was done during the tenure of Arbab Ghulam Raheem.

The CM said that the alliances have been constituted against them, adding that the prime minister had promised to address our reservations.

Bilawal Bhutto announces to bring a no-confidence motion against PM

RAWALPINDI (92 News) – Responding to the reservations of PML-N on appointment of Justice (rtd) Sheikh Azmat, Minister for Science Fawad Chaudhry has taunted that the opposition does not see any other judge except Iftikhar Chaudhry and Malik Qayyum

Pakistan being pushed towards anarchy by some internal helpers: Shahbaz Gill

ISLAMABAD (92 News) – Prime Minister’s Special Assistant on Political Communication Dr Shahbaz Gill said recent revelations about India indicate that a vicious attempt is being made by some internal helpers to push Pakistan towards anarchy.

ISLAMABAD (92 News) – The enemy of peace India is a cause of regional chaos and a threat to global stability as another great double game of Indian government to destroy the regional peace with its links with Daesh has been exposed.

ISLAMABAD (92 News) - The Supreme Court (SC) has rejected the bail petition filed by PML-N leader Hamza Shehbaz in money laundering case after he decided to withdraw it on Friday.