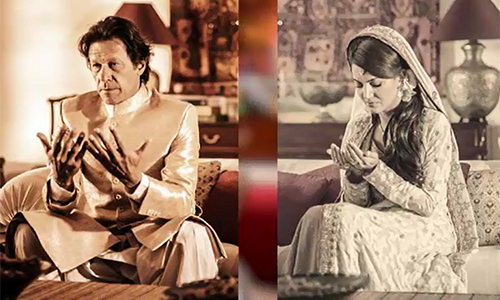 LONDON (92 News) – Although Pakistan Tehreek-e-Insaf Chairman Imran Khan, 62, and his glamorous BBC weather presenter wife Reham, 42, insist they parted amicably in Pakistan, a source revealed that the end finally came when Imran texted his wife the word ‘talaq’ (the Arabic term for ‘I divorce you’) written three times. This was followed by a brief email, claimed Daily Mail. Reham, who received the message as she stepped off a plane that had taken her from Pakistan to Birmingham, is believed to have also received a confirmation call from Imran’s chief of staff. Her first major change was to throw Imran’s beloved pet dogs from his bedroom. ‘They were no longer allowed to sleep in their master’s inner sanctum or even be there during the daytime,’ another source said. ‘Imran was upset when she had them shifted to a room outside the house and refused to budge despite his pleas. According to the newspaper, ‘Reham Khan made his life a living hell. The wonder is that things dragged on for as long as they did. They argued over his habit of sharing his bedroom with his dogs, and her jealousy over his continued close relationship with Jemima Goldsmith, his ex-wife and the mother of his two sons.’ Imran’s sisters, having made it clear that they considered Reham an unsuitable wife, refused to visit for as long as she was there.