PTI is the only opposition party, says PTI’s Shafqat Mehmood 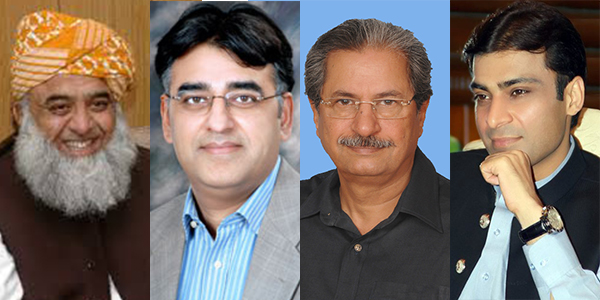 PTI is the only opposition party, says PTI’s Shafqat Mehmood

ISLAMABAD (92 News) – Jamiat Ulema Islam-Fazl chief Moulana Fazlur Rehman has on Monday said that the people are facing non-serious politics of Pakistan Tehreek-e-Insaf (PTI). Talking to media outside Parliament, Moulana Fazlur Rehman said that the PTI’s allegations of rigging proved false, adding that Ayaz Sadiq performed well in Parliamentary matters. The PTI candidate for NA Speaker Shafqat Mehmood said that they knew that the number game is not in their favor but they would keep competing against the government at every level. “The PTI is the only opposition party,” he said. Pakistan Muslim League-Nawaz (PML-N) leader Hamza Shahbaz said that the PTI chairman Imran Khan has wasted his time in leveling allegations and staging sit-ins, adding that the PTI should quit its ways of violence and work for the people of the country. Pakistan Tehreek-e-Insaf leader Asad Umer said that Ayaz Sadiq should protect the Parliament’s privilege, adding that the government has made the parliament meaningless.