PTI members have returned to assemblies after licking their own spit: Altaf Hussain 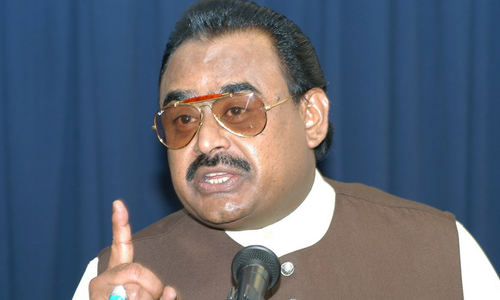 PTI members have returned to assemblies after licking their own spit: Altaf Hussain

KARACHI (92 News) – Muttahida Qaumi Movement (MQM) chief Altaf Hussain has said that the PTI members have returned to the assemblies after licking their own spit. Addressing the MQM workers on phone at Jinnah Ground, the MQM chief said that the membership of a member ends when he submits his resignation. “The people saying the parliament a bogus one have returned to assemblies.” Altaf Hussain said that MQM workers had not attacked the PTI camp in Karimabad. “In fact it was annoyance of the people living there.” He hoped that the MQM candidate will win the NA-246 by-poll by a heavy margin on April 23. “Women should cast their votes first and then men should come out to cast their votes,” he urged. About the Yemen situation, the MQM chief said that the issue should be resolved through talks not explosives. He wished the conditions conducive for his return so that he could be among the workers.