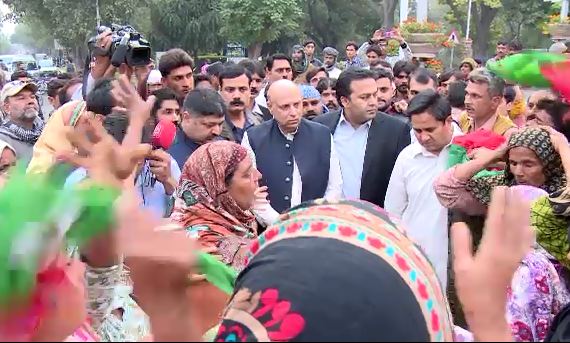 LAHORE (92 News) – The activists of Pakistan Tehreek-e-Insaf have on Sunday held a protest demonstration and staged a sit-in in front of Governor House with the body of a party worker killed in Pattoki. Hayat Muhammad had severally injured when unknown gunmen opened fire at them during the celebration of the victory of a PTI candidate in local bodies election along with other workers of the party on October 31. The heirs of the deceased accused the PML-N leaders of the attack while the nominated accused had been released after arrest. They further accused that those still in custody are being given VIP protocol in lockup. The PTI’s Punjab Organizer Chaudhry Sarwar also took part in the sit-in and accused the PML-N of targeted killing of PTI workers for not casting vote in their favor. Later, the protesters dispersed after being assured of the arrest of the accused by the police.