According to the details garnered, the Punjab chief minister evaluated the routes of the processions and security arrangements by helicopter.

After aerial review, Usman Buzdar expressed satisfaction over the best security arrangements and said that the Punjab government has made best arrangements for maintaining the peace during the processions on Youme-e-Ashur.

The Punjab chief minister directed to ensure the implementation of security plan designed by police and administration. “The all forces are ready to foil the enemy’s terrorism efforts. 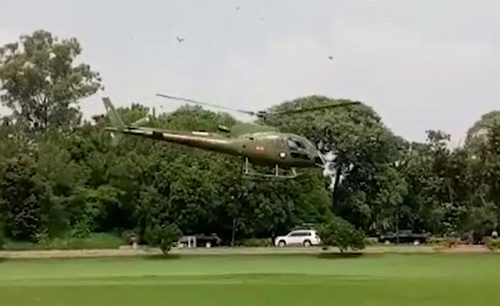 Today, Youm-e-Ashur, in remembrance of the martyrs of Kerbala, is being observed with religious fervour across the country.

The Zuljinah processions concluded at their designated places after passing through traditional routes in Islamabad, Lahore, Karachi and Quetta.

Taazia and Zuljanah processions will be taken out in all cities and towns of the country including Islamabad, Lahore, Karachi and Quetta. Ulema and Zakireen will highlight the bright and candid teachings of Hazrat Imam Hussain (RA) and various aspects of Karbala tragedy.

Meanwhile, elaborate arrangements have been made to ensure security of mourning processions and Majalis. Police and other law enforcement agencies will be deployed to ensure law and order.

The foolproof security is being provided to the processions of 10th Muharram as all routes going towards processions has been sealed.

According to the reports, there will be a ban on pillion riding from the night of the 8th of Muharram until Ashura in order to maintain law and order and avoid any untoward incident.

Security has been beefed-up for 10 Muharram processions in Karachi, Islamabad, Lahore and other cities. The police have sealed shops and blocked roads with containers.

The internet and mobile services will be blocked into the sensitive places during the procession of 10th Muharram.