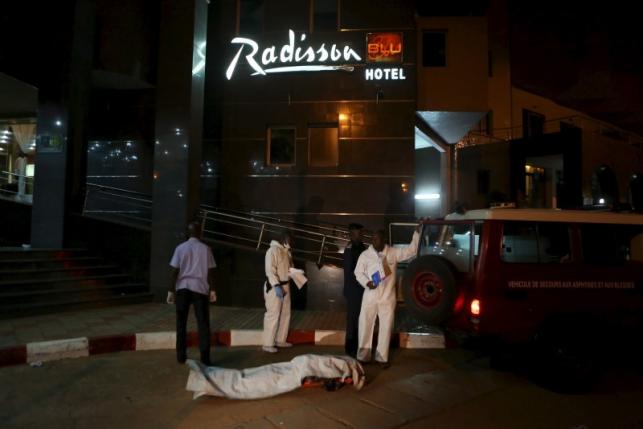 BAMAKO – Russian President Vladimir Putin said on Saturday global cooperation was need to confront terrorism in the wake of an Islamist militant attack targeting foreigners in a luxury hotel in Mali that killed 19 people. Friday's assault on the Radisson Blu hotel in Bamako came a week after militants killed 130 people in a spate of gun and bomb attacks in Paris claimed by Islamic State. France on Friday extended a state of emergency until February as police pursued raids and investigations, with over 250 people detained. The bloodshed in Mali, a former French colony, was the latest sign of the problems faced by French troops and U.N. peacekeepers in restoring security in a West African state that has battled rebels and militants in its desert north for years. The assault on the Radisson Blu hotel, claimed by jihadist groups Al Mourabitoun and al Qaeda in the Islamic Maghreb (AQIM), ended when Malian commandos stormed the building and rescued 170 people, many of them foreigners. President Ibrahim Boubacar Keita said two militants were killed in the commando operation. His government increased security at strategic points around Bamako at the start of a declared 10-day state of emergency. Chinese President Xi Jinping condemned the "cruel and savage" attack, whose dead included three Chinese executives of a state-run railway firm. The head of a Bamako hospital told Russian television channel LifeNews that at least two Russian citizens were killed. RIA news agency said Russians were among the dead, citing Foreign Ministry spokeswoman Maria Zakharova. Putin sent a telegram of condolences to Keita and said "the widest international cooperation" was needed to confront global terrorism, according to a statement by the Kremlin. On Tuesday, Putin promised to hunt down Islamist militants responsible for blowing up a Russian airliner over Egypt on Oct. 31 as well as intensified air strikes against militants in Syria, after the Kremlin concluded a bomb had destroyed the plane, killing 224 people. Putin and French President Francois Hollande also spoke by phone on Tuesday and agreed to boost coordination of their military actions in fighting jihadist militants in Syria. One American and a deputy from a regional parliament in Belgium were also killed in the Bamako hotel attack, though French Defence Minister Jean-Yves Le Drian said he was not aware of any French nationals killed. FLEEING IN TERROR The attack began at 7 a.m. on Friday when gunmen killed guards at the entrance of the hotel and barged inside. Malian commandos subsequently stormed the hotel and rescued around 170 people, many of whom had been hiding under beds or in side-rooms and rushed terrified from the building to safety as shooting continued inside. By around 4 p.m. the hotel was secured but Malians woke on Saturday to a sense of shock at the latest high-profile raid by Islamists this year. "I feel bruised by this atrocious act, which cannot be justified. No nation, no human life deserves such criminal barbarity," said Oumar Fomba, a teacher. "I urge the Malian government to fight more fiercely against terrorism." In a speech on the sidelines of a summit with Asian nations in Malaysia, U.S. President Barack Obama described the raid in Mali as "another awful reminder of the scourge of terrorism". "Once again, this barbarity only stiffens our resolve to meet this challenge. We will stand with the people of Mali as they work to rid their country of terrorists and strengthen their democracy. With allies and partners, the United States will be relentless." SETBACK FOR FRANCE The attack was another jolting blow to France after the shock of the Paris carnage. France has stationed 3,500 troops in northern Mali to try to restore stability after a rebellion in 2012 by ethnic Tuaregs that was later hijacked by jihadists linked to al Qaeda. "We (France) have proved to be as blind as the Malian elite. Nothing changes in Mali. The elite continues to act like it always has as does the international community," said Laurent Bigot, former undersecretary in charge of West Africa at France's foreign ministry, alluding to U.N. peacekeepers. "People have been ringing the alarm bell for a long time, but it doesn't do any good," Bigot, who now works as a consultant, told Reuters. The attack also cast a spotlight on a veteran leader of Al Mourabitoun, Mokhtar Belmokhtar, a few months after reports, never confirmed, that he was killed in an air strike. Northern Mali was occupied by Islamist fighters, some with links to al Qaeda, for most of 2012. They were driven out by a French-led military operation, but violence has continued. Al Mourabitoun has claimed responsibility for a number of attacks, including an assault on a hotel in the town of Sevare, 600 km (375 miles) northeast of Bamako, in August in which 17 people including five U.N. staff were killed. One of its leaders is Belmokhtar, blamed for a large-scale assault on an Algerian gas field in 2013 and a major figure in insurgencies across North Africa. In the wake of the Paris attacks, an Islamic State militant in Syria told Reuters the organization viewed France's military intervention in Mali as another reason to target France and French interests. "This is just the beginning. We also haven't forgotten what happened in Mali," said the non-Syrian fighter, who was contacted online by Reuters. "The bitterness from Mali, the arrogance of the French, will not be forgotten at all." –Reuters