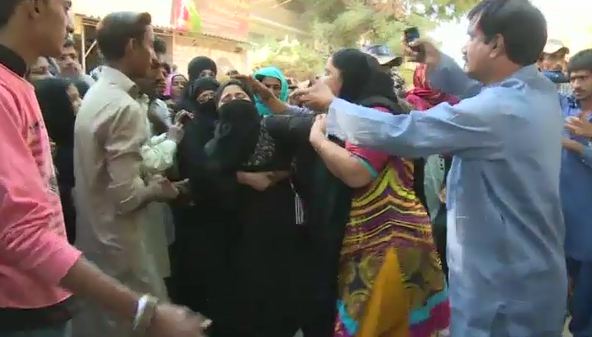 KARACHI/LAHORE (92 News) – The polling stations at various places turned into a battlefield as supporters of different participating candidates clashed with each other during voting time for the second phase of local government elections in Punjab and Sindh. Clashes between rival candidates of political parties have become a latest trend in elections. The activists of political parties shower slaps in different areas, while a man was killed and dozens injured during firing incidents in different cities. In Sheikhupura, at least 10 people sustained critical injuries when clash erupted between two rival groups of Pakistan Muslim League-Nawaz (PML-N) and Independent candidate in Union Council 31, while two workers are said to be in critical condition. Police detained a polling agent. In Gujranwala, clash erupted between activists of PML-N and PTI in UC-53, injuring a PTI worker, while police have apprehended an independent candidate Khalid Bajwa from UC-22. In Mandi Bahauddin, a scuffle broke out between two groups in Malikwal’s polling station No 63 and 64, while a quarrel erupted between rivals in the presence of police for stopping women from casting their vote in Chiniot Chenabnagar’s Ward No 3. On the other hand, scuffles broke out between the activists of rival political parties in Mirpur Khas, Badin, Toba Tek Singh and other districts of Sindh.