Quetta through to final after one-run win 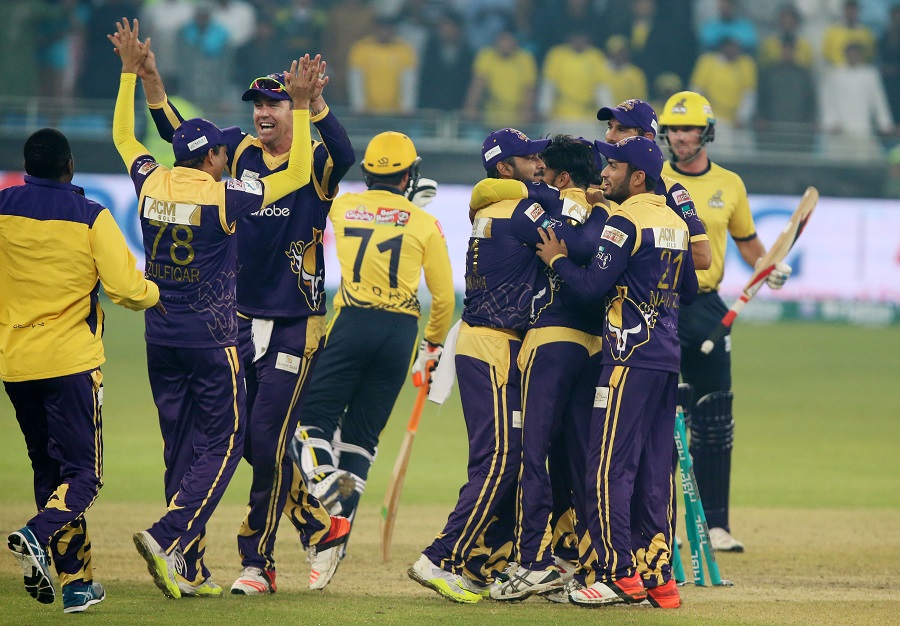 The first qualifier of the inaugural Pakistan Super League was a nail-biting affair and came down to the last ball, with Quetta Gladiators holding their nerve to clinch a one-wicket win and leave their opponents Peshawar Zalmi heartbroken. Victory for Quetta secured their berth in Tuesday's final in Dubai, while Peshawar will have a chance to make amends for their close defeat in the third and last qualifier, against either Karachi Kings or Islamabad United.

After 39 overs of entertaining cricket at the Dubai International Cricket Stadium, Peshawar were left needing eight runs from six balls; Quetta required three wickets. Darren Sammy, who had blown new life into Peshawar's chase, had just been dismissed and the edge - albeit a slight one - was with Quetta.

A dot off the first ball of the over, bowled by Aizaz Cheema, titled the contest further Quetta's way. However, Wahab Riaz seemed to emerge an unlikely hero for Peshawar, slamming the second ball - a low full toss outside off - over cow corner for four. He then proceeded to take a single. Three needed off three, and it was anybody's game.

Cheema, though, drastically turned the fate of the match with his next two deliveries. First, Hasan Ali was out caught and bowled. Then, Wahab swung wildly in an attempt to finish the game, but ended up skying the ball straight to Ahmed Shehzad at point. Cheema was on a hat-trick, and Mohammad Asghar, the new man in, had the unenviable task of striking the last ball for at least three. Cheema did not get his hat-trick, but more importantly, Asghar was unable to put the bowler's rising short ball away. Quetta, led by their mentor Viv Richards broke into wild celebrations, while the Peshawar players struggled to hide their disappointment.

That the game had even gotten so close was courtesy Darren Sammy's 38-run blast, which lifted Peshawar from a precarious position of 84 for 6 in the 15th over. Quetta, who had only 133 to defend with, were led by three-wicket hauls from both Grant Elliott (3 for 19) and Man of the Match Mohammad Nawaz (3 for 27). Nawaz accounted for the key scalps of Brad Hodge, Mohammad Hafeez and Sammy, before Cheema's heroics at the end completed the memorable victory.

Quetta had earlier made a horror start after being inserted, losing their opener Bismillah Khan off the second ball. Ahmed Shehzad fell soon after, but Kumar Sangakkara and Kevin Pietersenstrung together a 79-run partnership to lead a recovery. Pietersen blasted 53 off 38 balls with five fours and two sixes, while Nawaz also pitched in with what eventually proved to be a very handy 20 runs. Wahab Riaz was the pick of Peshawar's bowlers, taking 3 for 17 to bundle Quetta out for what at the time seemed like a below-par 133. Nawaz and Cheema, though, ensured that the total was enough, just. cricinfo

LOS ANGELES (Reuters) - Fans of the late Kobe Bryant, who died a year ago to the day alongside his daughter and seven others when their helicopter crashed into a hillside near Los Angeles, honored the basketball legend on Tuesday in a city where the memory of his death is still fresh.