FM Qureshi met with WHO Director General Dr Tedros on the sidelines of UN Human Rights Council meeting in Geneva. The minister apprised the WHO director general that food and medicines are not available to people in Indian Occupied Kashmir (IoK) due to imposition of curfew there by India since 5th of the last month.

Shah Mehmood Qureshi said the medical staff is facing great difficulties to provide medical facilities to pregnant women, children and elderly people. He further elaborated that said the grave situation in IoK is indicating emergence of a new humanitarian crisis.

The minister will address in Geneva during the 42nd session of the UN Human Rights Council. 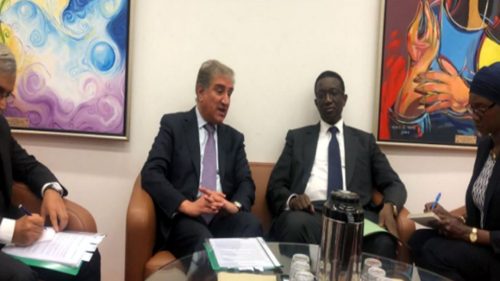 Talking to his Senegalese counterpart in Geneva, the foreign minister has said the international community will have to play its role to get stopped Indian atrocities and oppression in Occupied Kashmir.

He said Indian forces are subjecting the Kashmiri people to the worst form of repression. He said a complete siege has been laid around the occupied valley by the Indian forces since 5th of last month.

FM Qureshi said that the international media and human rights organizations have exposed the Indian oppression, adding that Pakistan has great expectations from Senegal being the president of Human Rights Council.

On the occasion, the Senegalese foreign minister expressed concerns over the situation in Indian Occupied Kashmir.

Earlier, FM Qureshi has said that Indian atrocities and barbarism in Indian Occupied Kashmir (IoK) are getting exposed before the world.

In his video message, who is representing Pakistan at the 42nd session of UN Human Rights Council in Geneva, the foreign minister welcomed the statement by the UN High Commissioner for Human Rights Michelle Bachelet regarding Indian tyranny in IoK, adding that saying it is very encouraging.

A day earlier, FM Qureshi reached Geneva to present the case of innocent Kashmiris at the 42nd session of UN Human Rights Council.