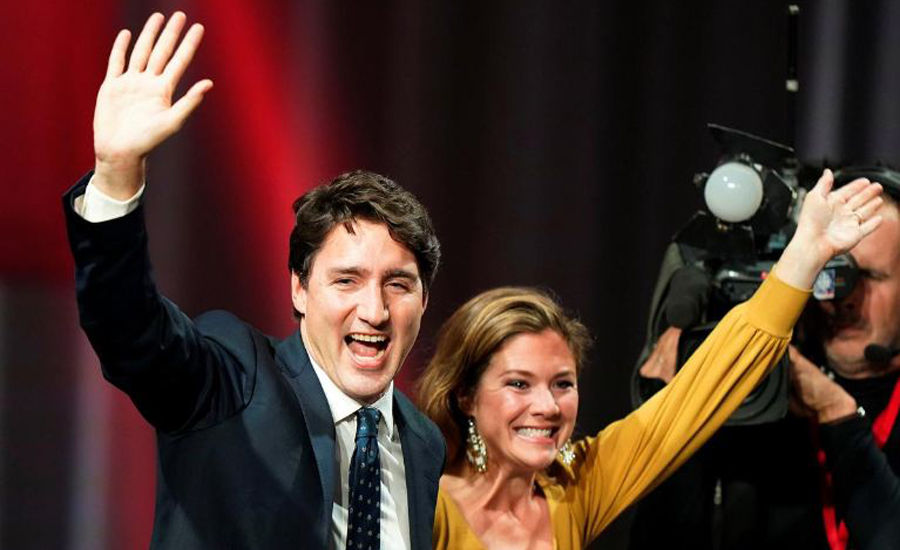 OTTAWA (Reuters) - Canadian Prime Minister Justin Trudeau pulled off a second consecutive election win on Monday with a late change in tactics designed to scare progressive voters who showed signs of abandoning Liberal candidates, four Liberal campaign sources said. As polls indicated he could lose, Trudeau ditched his “sunny ways” persona that had swept him to power in 2015 and started hammering away at three smaller parties on the left, warning their supporters that if they didn’t vote Liberal, the progressive vote would splinter and allow the opposition Conservatives to take power. During the last two weeks of the campaign, Trudeau repeatedly told supporters that voting for the rival New Democrats, Bloc Quebecois and Greens would result in a progressive opposition, not a progressive government. “We’re doing this because it works,” one Liberal official said of the strategy as the campaign reached its climax last week. He and the three other Liberal aides and strategists in this story declined to be named because they were not authorized to discuss campaign strategy. Rival parties lately complained about what they saw as fear-mongering by Trudeau, who won a healthy minority and should be safe for the next two years. “The Liberals like to talk progressive, but they govern conservative,” Jagmeet Singh, leader of the New Democrats, said on Oct 15. “I want people to dream big. Don’t settle for less.” Former Liberal prime minister Paul Martin used the same fear-inspiring technique in the last week of 2004 election, during which he managed to fight off a challenge from the Conservatives. “It’s absolutely a legitimate strategy by people who want to drive votes toward them based on fear of the worst result,” said Tim Murphy, who was Martin’s chief of staff at the time. Former Liberal deputy prime minister John Manley said Monday’s results in the populous province of Ontario, where the party held onto virtually all of its seats, showed the tactic had worked. Support for the New Democrats, seen as a major left-leaning challenger in some seats, fell markedly in the last few days, allowing Trudeau to stay in power, he noted. “You’d rather people voted enthusiastically for you rather than against someone else, but at the end of the day, who won?” Manley said in a phone interview. Neither the Liberal nor Conservative campaign spokespeople were immediately available for comment. The victory was all the more remarkable because Liberal campaign officials had heard from the first day about deep dissatisfaction with Trudeau from long-time supporters. Trudeau came into the campaign trying to shake off the effects of an ethics scandal and ran into further problems when photos emerged of him wearing black face. “Some people are telling me ‘Normally I would vote for you, but a vote for you is a vote for (Trudeau) and I’m not voting for him come hell or high water’,” said one Liberal legislator who declined to be named. Liberal parliamentarians and strategists described what they saw as a poorly-run campaign that did not focus nearly enough on the party’s economic successes and spent too much time talking about progressive issues. “The thing that has absolutely frustrated me the most is that the economy has really been smoking ... and he has not sung that song,” said the Liberal legislator. The party presented proposals designed to appeal to voter-rich inner cities, such as a clamp-down on gun violence and a proposal to cut cell phone bills. The polls did not move, much to the consternation of Trudeau officials. A senior Liberal campaign official said the shift in strategy to a less sunny tone was designed to underscore how different Trudeau’s policies were from those of the Conservatives, especially since the parties were locked in the polls. “We knew we first had to establish a plan ... and then be able to say, ‘These are the things that we want to be able to do, vote for your values, but vote for your values in a way that turns it into action,” the official said. Unlike 2015, when the Liberals had a year to get ready for the election, two of the Liberal campaign officials said, preparations this time were delayed by months as the party struggled with the pressures of governing and the after-effects of the ethics scandal. Canada’s independent ethics watchdog found Trudeau had violated ethics rules when he tried to push his former justice minister and attorney general to drop criminal charges against a Quebec engineering company. The scandal – which cut the Liberals’ popularity ahead of the election - also temporarily cost Trudeau the services of close aide and key strategist Gerald Butts, who resigned in February but returned in July. He was not present as Trudeau’s inner team started lengthy debates over what the main planks of the platform should be. In the end, the Liberals chose a mixture of proposals designed to build upon advances made since 2015 while adding promises for big-ticket items such as expanding a program to provide coverage for the cost of prescription drugs. In the last election, Trudeau attracted millions of new voters including women, young people, aboriginals and environmentalists. Since then, however, Trudeau had alienated various parts of this coalition by ditching plans for electoral reform, forcing two prominent female former ministers out of caucus over the ethics scandal and buying a crude oil pipeline opposed by environmentalists.