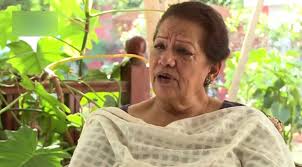 KARACHI (92 News) – Rangers officials on Wednesday arrested the primary suspect involved in assassination of Pakistan Tehreek-i-Insaf (PTI) leader Zahra Shahid Hussain, 92 News reported. Rangers arrested suspect, Kaleem, after taking action on a tip-off and conducting a targeted operation in surrounding areas of Teen Talwar in Clifton. Kaleem is also wanted in several murder cases of. The Rangers also seized weapons from the suspect's possession. Senior vice president of PTI in Sindh, Zahra Shahid, was assassinated outside her house in May, 2013.