RAWALPINDI (92 News) – Two people were killed in a firing incident at the emergency of the District Headquarters Hospital Rawalpindi early on Saturday, police said.

According to DSP City Faisal Saleem, the suspect is police constable Tehseen Tariq who opened fire at a patient admitted to the  emergency ward. The firing also left the patient’s attendant fatally wounded.

The sudden intrusion by the armed suspect into the emergency ward and firing triggered panic among the hospital staff, patients and visitors who ran here and there to save their lives. 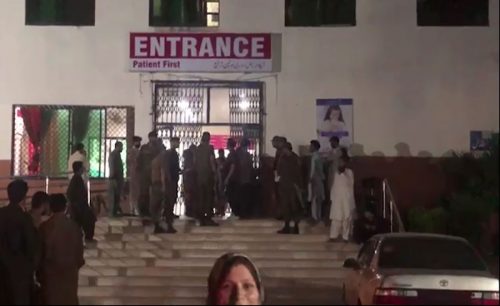 Tehseen, who is posted at Pir Widhai police station, fled after firing, the DSP said, adding the victims were identified as 50-year-old Lehrasab and his attendant 24-year-old Naveed.

He said police had launched investigation to determine if the incident linked to an old enmity or some other motive.

The emergency was temporarily closed for operations. The bodies were shifted to the mortuary for autopsies.

Police sources said Lehrasab had got a case registered against Tehseen’s father two days ago.

The firing inside the emergency exposed the security arrangements by hospital and police.

The hospital’s doctors refused to work in the emergency as they said no security had been provided in the hospital despite several alerts.