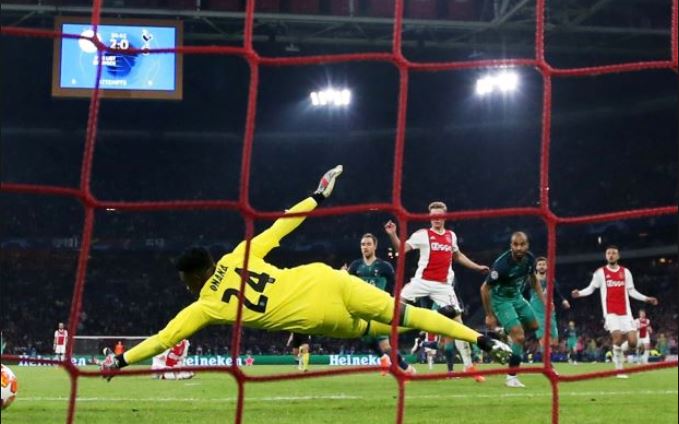 LONDON (Reuters) - Reaction to Tottenham Hotspur’s last-gasp 3-2 Champions League semi-final win over Ajax Amsterdam that sent them through to the June 1 final against Liverpool on away goals.

Tottenham manager Mauricio Pochettino: “The emotion is amazing, thank you to football. My players are heroes - in the last year I was telling everyone this group are heroes. The second half they were amazing. Thank you football - this type of emotion without football is not possible. Thank you to everyone who has believed in us. To describe this in words is difficult.

“We were talking before the game that when you work and when you feel the love, it’s not stress it’s passion of the team. We showed we love the sport and football. Today was amazing. It was a joy to watch this kind of game.

“They are all heroes but (Lucas Moura) was a superhero. From the first to last one - the tough moment to live in the five years before.”

Tottenham midfielder Christian Eriksen: “It was a non-tactical performance, it was more of a fight, more of a heart performance, and that’s how we won it.

“It was a ridiculous game. We were really far down, we tried to fight back and we’re just lucky. I feel sorry for Ajax, they played a very good game against us.”

Tottenham striker Harry Kane, who missed the match through injury: “It was amazing. I’m a fan first and foremost and I know how much it means to the club.

“The lads dug deep and showed passion and that is all you can ask for. We had to wait to get the third in the last minute and we found a way. That is what football is about and we have the final to come.”

Tottenham defender Danny Rose: “We saw Liverpool last night. It goes to show it’s not over until it’s over. The gaffer mentioned Liverpool’s display at the hotel before the match - the gaffer doesn’t mind us losing but we have to lose the right way.”

Ajax Amsterdam captain Matthijs De Ligt: “It’s a nightmare, like a dream. We played well in the first half, we had it all our way.

“We didn’t keep up the same pressure in the second half. We gave silly goals away. We were so close to the final ... and then the ball goes in. Unbelievable.”

Ajax coach Erik ten Hag: “We were so close, we had so deserved it, but that last second...

“Football can be very beautiful and it can be very cruel, we have had to experience that today.”

“Overall we had a fantastic Champions League campaign, we were one second away from the final, our team deserves a very big compliment, I am very proud of my players.

“I told the players in the break that it wasn’t over yet, you could tell by the attitude of the Tottenham players. They still believed in it.

“When that ball hits the post from Hakim Ziyech, it’s over and out for Spurs. But I can’t blame anyone. We have had an incredible Champions League season and have grown a lot as a team. It is difficult to process.”

Former Ajax coach Louis van Gaal: “It was admirable that Spurs had the courage to never give up and try and do the business, but it was totally unnecessary of Ajax to let it all slip.

“This defeat was completely unnecessary. At half time there was nothing wrong with a 2-0 lead. In the second half, Tottenham took more and more risk and more and more attackers entered the field. Ajax made the wrong choices in possession of the ball in that phase.”

“I’m so glad that I’m still around to see this. I’ve been a Spurs fan since I was eight years of age. What a proud moment that was.”

Former Dutch international Ruud Gullit: “I feel for the (Ajax) youngsters. It’s going to be hard work because they’re going to lose a lot of players and they have to build up a new team. But thank you Ajax, thank you for the football that you showed us.”