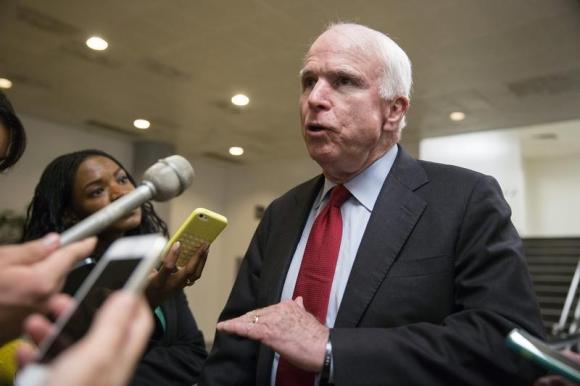 WASHINGTON (Reuters) - US Senator John McCain said on Thursday that Republicans stood behind a letter to Iran's leaders threatening to undo any nuclear deal despite an outpouring of criticism from the White House, US allies and Democrats. He said the Republican senators could have taken more time to talk about it, but he had no remorse. "Maybe we should have had more discussion about it," McCain told Reuters. "I certainly think I should have signed it, and I think that the message needs to be sent." The letter signed by 47 of the 54 Republican senators warned Iran that any nuclear deal made with President Barack Obama, a Democrat, could last only as long as he remained in office - a highly unusual intervention into US foreign policy-making. McCain and Senator Lindsey Graham, another frequent critic of Obama's foreign policy, spoke extensively in the Senate on Thursday defending the letter. "We're not going to let you tell us we have no voice in lifting the sanctions we created," Graham said. Republican Senator Tom Cotton approached his fellow lawmakers and asked them to sign the letter last week. The letter infuriated the White House and generated many harshly critical newspaper editorials as well as legal questions about whether the senators violated US law by seeking to communicate directly with a foreign government. German Foreign Minister Frank-Walter Steinmeier told reporters in Washington on Wednesday that the letter was not useful. Unhelpful is an "understatement," he said. Iran's Supreme Leader hit out at the letter on Thursday, saying he was worried because the United States was known for "backstabbing," Mehr news agency reported. The New York Daily News put the banner "Traitors" on its front page, with pictures of some of the signers. Senator Mark Kirk, another of the Republicans who signed the letter, said he was surprised by some of the reaction. "For Tom Cotton, a decorated military officer, to accuse him of treason is way over the top," he said. Democrats accused the Republicans of trying to make the Iran nuclear debate partisan after years of two-party work on the issue. Cotton's staff said he had reached out to "several" Democrats about the letter. But none said they had been contacted, including Senator Robert Menendez, one of the leading Democratic hawks on Iran.